State media in China say 396 people have been confirmed dead following the capsize of a ferry on the Yangtze river on Monday.

The Eastern Star had 456 people on board when it was hit by a storm. 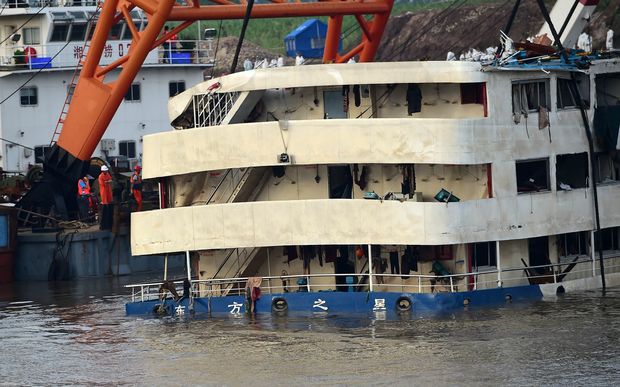 331 people are now known to have died on the Eastern Star. Photo: AFP

Salvagers righted the Eastern Star on Friday after officials said chances of finding anyone alive were slim.

Just 14 of the 456 passengers and crew are known to have survived. More than 100 are still missing.

The tragedy looks set to be China's worst shipping disaster in more than 60 years of Communist rule.

Hundreds of the bodies were discovered after emergency workers righted the ship with cranes and raised it above the river's currents.

Hooks were welded onto the ship and a net stretched around the entire structure in order to lift it.

By first light on Friday, the ship could be seen lying on its side with its name visible just above the water. Xinhua state news agency later tweeted a picture of the righted vessel, its roof apparently crushed.

Officials said there had been no further signs of life inside the ship, Xinhua news agency reports.

Chinese President Xi Jinping promised a thorough investigation into the cause of the disaster, after angry relatives protested at the scene.

Authorities tightly controlled access to the site, leading family members and journalists to complain about a lack of information.

Most of the 14 people known to have survived jumped from the ship as it began to sink. Three were rescued by divers from air pockets in the upturned hull.

The cause of the sinking is not yet known, but survivors have spoken of an intense storm which flipped the boat over in minutes.

The captain and chief engineer, who were among those who escaped, have since been detained.

Maritime agency records showed the ship was investigated for safety violations two years ago. It was held alongside five other vessels in 2013 over safety concerns.

China's deadliest maritime disaster in recent decades was in November 1999, when the Dashun ferry caught fire and capsized in the sea off Shandong province, killing about 280.

The Eastern Star could become China's deadliest boat accident since the SS Kiangya sank off Shanghai in 1948, killing somewhere between 2,750 and 4,000 people.