Asian countries have agreed to work together to try to stem the region's migrant crisis, as Myanmar brought to shore another boat full of migrants. 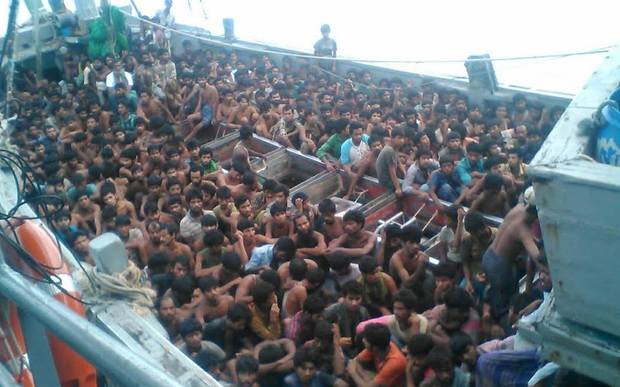 An image posted by Myanmar's Ministry of Information is reported to show the migrant vessel it intercepted on Friday. Photo: Facebook / MOI Webportal Myanmar

Countries agreed to intensify search-and-rescue operations as well as address root causes of migration at a regional conference in Bangkok.

Myanmar rejected allegations that it was largely to blame for the crisis.

Myanmar's persecuted Rohingya minority, as well as Bangladeshi immigrants, make up the bulk of those stranded at sea.

On Friday, it said it had picked up a boat with 727 migrants on board - just a week after it picked up about 200 in its first such operation.

The crisis began earlier this year when Thailand cracked down on overland migrant routes, forcing people smugglers to use sea routes instead.

Thousands of migrants are thought to be stranded at sea, trying to head south to Thailand, Indonesia and Malaysia.

At the start of the Asean regional grouping - also attended by the US, UN and International Organization for Migration (IOM) - Thai Foreign Minister Thanasak Patimaprakorn said the situation had reached "an alarming level".

Myanmar - also known as Burma - published images of the latest migrant vessel it said it had intercepted off its southern coast on an official Facebook page.

They show a boat crammed with men, watched by a guard with a rifle. Below deck, women are pictured - Myanmar said women and children accounted for 119 of those on board.

Myanmar said those picked up on Friday had been taken to a naval base in the Irrawaddy Delta.

It referred to the migrants as "Bengali" - a term it uses to describe immigrants from Bangladesh and its Rohingya Muslim minority.

The country has faced criticism for failing to do enough to help stranded migrants.

In a speech at the start of the meeting, senior UN official Volker Turk alluded to Myanmar's harsh treatment of its effectively stateless Rohingya Muslims, saying "addressing root causes... requires full assumption of responsibility by Myanmar towards all people on its territory.

"In the interim, a legal status for all habitual residents recognising that Myanmar is their own country is urgently required."

But, in Bangkok, Myanmar foreign ministry chief Htin Linn hit back, telling delegates that on "this issue of illegal migration of boat people, you cannot single out my country.

"Finger-pointing will not serve any purpose. It will take us nowhere."

Friday's Asean meeting was attended by 17 countries affected by "irregular migration in the Indian Ocean", observers from the US, Japan and Switzerland and other agencies.