More than 60 people have been killed in a landslide in Antioquia province in north-west Colombia, officials say. 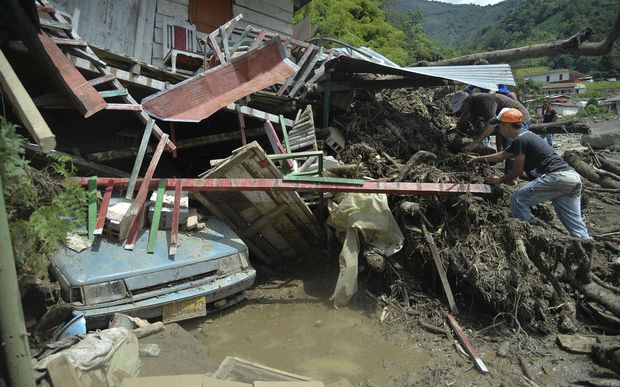 People search for relatives after the landslide. Photo: AFP

President Juan Manuel Santos said the authorities do not know how many people are still missing.

Heavy rains caused the river Liboriana, in the town of Salgar, to burst its banks, triggering the landslide.

Much of the village of Santa Margarita, south-west of the provincial capital, Medellin, was swept away when the disaster hit early on Monday.

Rescue teams and residents have got together to dig through rouble in the hope of finding survivors.

After visiting the scene of the disaster, Mr Santos declared a state of emergency and promised to rebuild the houses.

"We cannot bring the dead back, which we regret deeply, and we will support the families (of the victims)," said Mr Santos earlier.

"But we have to move on from this tragedy, and look ahead with courage and fortitude."

"The priority now is the hospital," said the president.

Earlier on Monday, gas and electricity services in the town were suspended as a precautionary measure.

The Colombian Air Force and police have sent helicopters to the area. More than 160 soldiers are working in the emergency effort.

Some 100 people have been evacuated from high-risk areas.

Mud, rocks and tree trunks destroyed many houses in poor neighbourhoods close to the river.

"I said to my wife, let's hold each other and hope that God saves us and I know he gave us his hand because here we are, alive, still frightened, but still alive."

More rain is expected in the are in the next few days.