Pope Francis has met Palestinian President Mahmoud Abbas at the Vatican, calling him "an angel of peace". 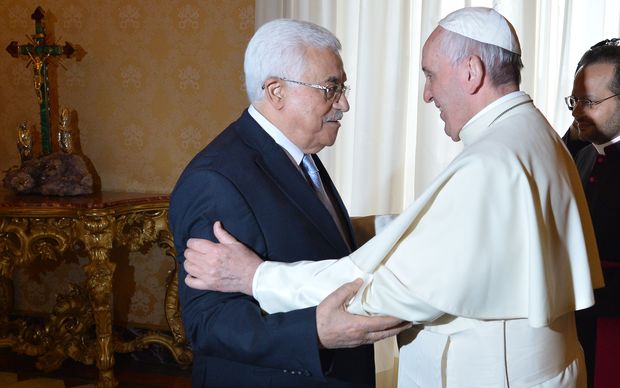 The Pope made the remark as he presented the Palestinian leader with a medallion.

President Abbas is visiting the Vatican for the canonisation of two 19th-Century Palestinian nuns on Sunday.

His visit came days after the Vatican said it would formally recognise Palestinian statehood in a treaty.

The treaty states that the Holy See favours a two-state solution to the conflict with Israel and allows the Vatican to oversee aspects of Roman Catholic life in the areas President Abbas controls.

Israel expressed disappointment with the treaty, which uses the term "Palestinian state".

The BBC's David Willey in Rome says that after 20 minutes of private talks, Pope Francis gave Mr Abbas the medallion depicting an angel of peace adding: "It is appropriate because you are an angel of peace."

Correspondents say the Vatican is keen to protect the property and civil rights of the Catholic Church in the Palestinian territories.

Over the past year the European Parliament as well as the UK, Republic of Ireland, Spain and France have all passed non-binding motions in favour.

Sweden has gone further, officially recognising Palestine as a state.

The moves have been criticised by Israel, which says recognition of statehood in this way discourages Palestinians from resuming talks on a final status agreement.

Marie Alphonsine Ghattas - who was born to a Palestinian family in Jerusalem - co-founded the Congregation of the Rosary Sisters, which today runs many kindergartens and schools.

Mariam Bawardy was born in Galilee to Greek Catholic parents from Syria and Lebanon.

A mystic, she is said to have carried out many miracles and to have experienced stigmata - wounds representing those suffered by Jesus on the cross.

Both nuns lived through tough conditions, overcoming male dominance in Ottoman society, poverty and ill-health while helping others.

They are said to have seen apparitions of the Virgin Mary and remained in close communication with her.

By granting these women sainthood, the Church is celebrating their good works but it is also showing support for Christians in the birthplace of their religion, the BBC's Yolande Knell in Jerusalem reports.

The total number of Christians in Israel and the Palestinian territories has declined to less than 2 percent of the population.

This is partly because of growing Jewish and Muslim populations, but also because of the conflict and the chance of better opportunities abroad, the BBC correspondent added.