There were chaotic scenes as the families of Australian drug smugglers Andrew Chan and Myuran Sukumaran arrived for what is expected to be their final visit to the condemned men.

Family and friends embarked at the Indonesian port of Cilacap this morning to visit the Nusakambangan prison island today.

The ABCs Greg Jennett said media mobbed the families and Sukumaran's sister had to be carried through as cameras pressed in on all sides.

"The Chan and Sukumaran families had to run the gauntlet of a rowdy and obstructive media pack, it distressed them. There were fearful screams and police dogs snapped and growled, an ordeal for the families and friends before what could be their last visit to see Andrew Chan and Myuran Sukumaran alive," he said. 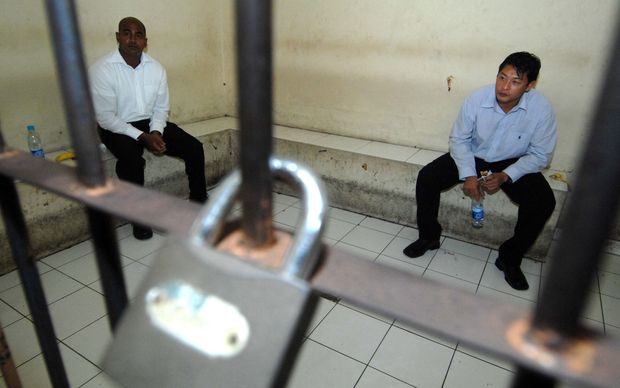 Ambulances carrying nine coffins have gone to Cilacap in central Java in another sign that executions are imminent on the prison island.

Indonesian government officials have signalled the execution of nine death row prisoners, including Chan and Sukumaran, will most likely go ahead this week.

The 72-hour notification period expires at midnight and it is clear officials are ready to act on any order.

Every deadly detail has been attended to with coffins and a cross they will bear - each of them named and dated, April 29 - prepared.

The ABC's Greg Jennett said the ambulance vans rolled into the dock, most with clear glass windows.

"Inside were wooden coffins, some upholstered in white fabric."

"I will continue to advocate for a stay of execution for as long as they are alive," she said 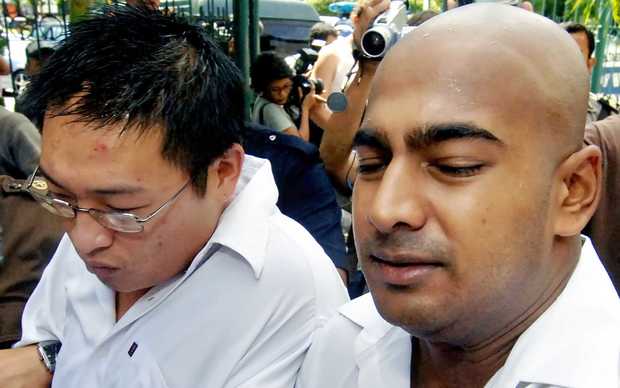 Lawyer for the two men, Michael O'Connell, said the Indonesian Constitutional Court had agreed to hear an application related to clemency on 12 May.

"That matter remains ongoing and we would want the attorney-general to respect that process," he told the ABC's Lateline.

On Monday, Sukumaran again indicated he expects to face the firing squad within days, signing another self-portrait with a telling inscription.

The back of the portrait bears Sukumaran's signature, the date and the words: "'The second last day' Myuran Sukumaran, Besi Prison, Nusakambangan."

Chan and Sukumaran's lawyer Todung Mulya Lubis returned from Nusakambangan and displayed the portrait for the media, saying the piece was completed on Sunday night.

"The painting tells all of us, we should not give up hope," Mr Mulya said.

Andrew Chan has married his girlfriend at Besi prison on Nusakambangan Island, ahead of his expected execution.

Michael Chan said his brother had been celebrating on Monday night with his new wife, Febyanti.

"They have had a celebration inside the prison this afternoon, with close family and friends," he said.

"It was an enjoyable moment. We would just like to celebrate that with him tomorrow as well. It's tough times, but happy times at the same time.

"So hopefully the president will still show some compassion, some mercy so these two young people can carry on with their lives."

Attorney-general Muhammad Prasetyo said it was not necessary for him to go to the president to advise when the executions would take place, but he was considering it.

A presidential meeting has been taken as a sign in the past that executions are about to occur.