British prosecutors have charged a 14-year-old boy with inciting an alleged plot to carry out a beheading and attack a parade in Melbourne on Anzac Day. 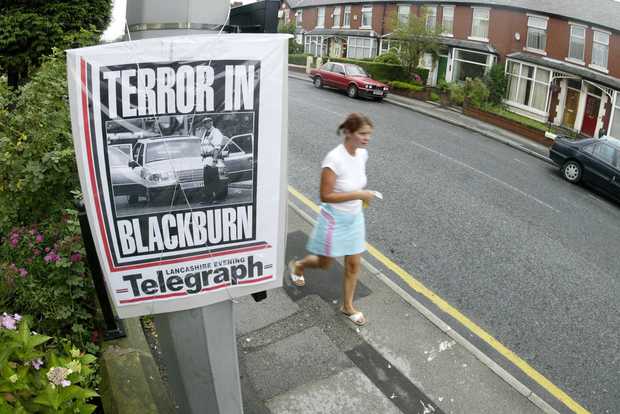 A pedestrian walks past a newspaper front page announcing the arrest of suspects on terrorism charges Blackburn, Lancashire. Photo: AFP

The boy from Blackburn in north-west England was arrested on Monday after Australian police arrested five men in counter-terrorism raids in Melbourne on Saturday.

One of the officers working on the case in Britain, Detective Chief Superintendent Tony Mole, said: "We have uncovered communication between an individual in the northwest and a man in Australia to what we believe is a credible terrorist threat."

"As soon as this information came to light we acted quickly with the relevant authorities here and abroad."

Two of the teenagers arrested in Melbourne have been charged with conspiring to commit a terrorist act while another faces weapons offences.

The others have been released pending further enquiries.

Unprecedented levels of security will be in place at Melbourne's Anzac Day dawn service and events across Victoria as a result of the raids.

"We have today authorised charges for a 14-year-old male of two offences of inciting terrorism overseas," Deborah Walsh, deputy head of counter terrorism at the Crown Prosecution Service, said in a statement.

Prosecutors referred to a "terrorism plot", saying that the boy had incited someone "to carry out an attack at an Anzac parade in Australia with the aim of killing and/or causing serious injury to people".

"The second allegation is that on 18 March 2015, the defendant incited another person to behead someone in Australia," Ms Walsh said, adding that the prosecution would be in the "public interest".

The defendant will appear in court today.