Australia and the United Kingdom will join forces to tackle profit shifting by multinational companies, in an effort to drive an international crackdown on the practice. 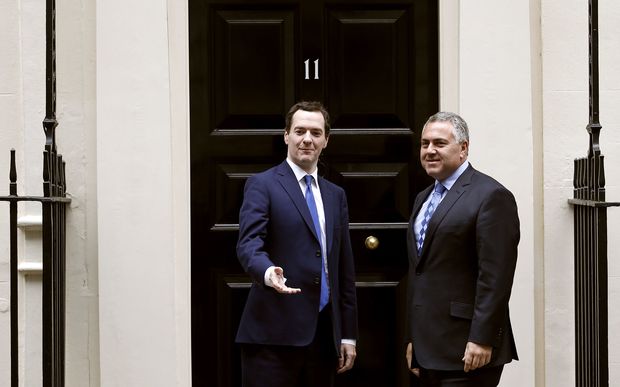 Treasurer Joe Hockey and UK chancellor George Osborne have announced the establishment of a joint working group during the G20 Finance Ministers meeting in Washington.

The task force will begin work after the British election next month and will develop methods to force companies to pay more tax in the countries in which they operate.

"The ministers have resolved, subject to the completion of the UK general election, to establish a senior officials working group that will develop measures to address the diversion of profits by multinational enterprises away from their host countries," a statement from Mr Hockey's office said.

"Both the UK and Australia have sought to put in place competitive business tax regimes in order to encourage enterprise and investment, but those tax rates should be paid, not avoided through artificial structures."

Mr Hockey told the ABC's Insiders program that while Australia will still work with the G20 and OECD to develop a coordinated global response to the problem, the need for action is urgent.

"On the floor of the G20, I raised the fact that we joined with other countries in expressing deep concern about profit shifting by multinationals," he said.

"And whilst we recognise that the OECD is undertaking work which Australia initiated and promoted last year, we obviously want to go further and faster.

"We are going for the next stage, which is to go after those companies, particularly individual companies that are not paying the proper amount of tax where they earn the income."

He said while Australia would work with the UK, it would not mirror their current legislation.

"The United Kingdom already has legislation in place and it's imposing a new tax," Mr Hockey said.

"Australia does not need to impose a new tax but certainly there are ways we can beef up the integrity measures around our own taxation system.

"We can learn a lot from what the British are doing with their so-called Google tax."

"Joe Hockey's answer to everything is to set up another discussion group, issue another paper. Labor's put a proposition on the table that the Government could take up right now," Mr Shorten said.

Greens leader Christine Milne also criticised the Treasurer's plan, calling for the Government to instead release data about how much it currently taxes big companies.

"His solution is to have an exchange of officials to talk about the problem some time after the British election. Not good enough Joe," Senator Milne said.

"If you're serious about tax avoidance, there are things we can do in Australia right now."

Mr Hockey said Australia would send officials over to the UK soon after the election.