Former New England Patriots player Aaron Hernandez has been found guilty of the first-degree murder of his friend, another American footballer. 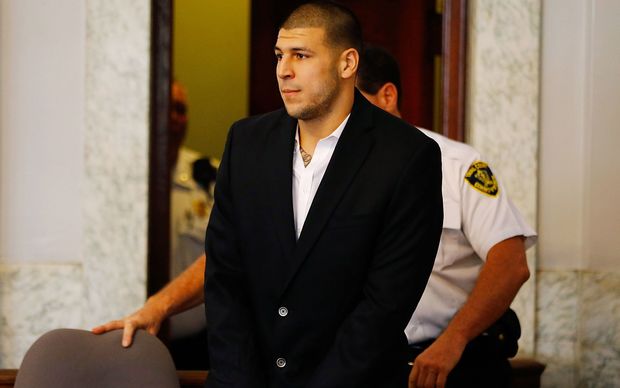 Relatives of the victim wept in the Massachusetts courthouse as the verdict was announced on live television.

Hernandez was sentenced to life in prison without parole.

He was arrested in 2013 and charged with killing Odin Lloyd, a semi-pro player who was dating the sister of Hernandez's fiancee.

Lloyd's body was found with six bullet wounds less than a mile from Hernandez's home.

At the time, Hernandez had a contract worth $US40m.

But within hours of his arrest, the Patriots sacked Hernandez, considered one of the top tight ends playing the game.

Hernandez is not an isolated case.

NFL players have been charged with any number of crimes over the years, from rape to dog-fighting.

Active NFL players are aged, in the main, between 21 and 34 and the arrest rate for that demographic is one in eight.

The arrest rate for people of Hernandez's age - he was 23 - is a startling one in six.

During closing arguments, his defence team acknowledged that he was present during the murder but said others committed the crime.

Prosecutors say Hernandez planned the "orchestrated execution" because of an incident in a night club, and then helped to cover it up.

The 25-year-old was found guilty of murder and other weapons charges on the seventh day of jury deliberations.

In a tearful statement to the court, Lloyd's mother Ursula Ward called him the "backbone of the family".