The Australian foreign minister, Julie Bishop, will lobby Iran next week to take back hundreds of failed asylum-seekers. 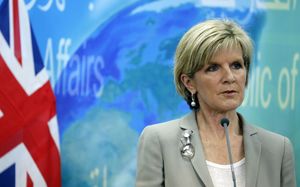 Ms Bishop is visiting Tehran as international nuclear talks with the country continue.

Iran has so far not been willing to re-accept citizens who have been rejected as refugees by Australia.

More than 3000 Iranians in Australia on bridging visas are yet to have their claims assessed, and more than a fifth of people in Australia's mainland detention centres are from Iran.

Government MP Paul Fletcher said there were many Iranians in detention whose claims had been refused and that returning people found not to be refugees was vital.

"Where there are people from Iran and indeed other countries who are found not to have refugee status, then ultimately what we seek to do is have those people returned.

"It inevitably can raise difficulties and challenges, and that is an important reason why it does make sense to be having discussions with the countries from which significant numbers of asylum seekers have come."

Mr Fletcher said the countries would discuss the treatment of people returned.

The Australian Green Party said it feared some people would be killed if they were forced back to Iran.

"If Australia strikes a deal with Iran to deport vulnerable asylum seekers, families, children, men and women, I fear mistakes will be made, and these are life and death decisions for many of them," Greens senator Sarah Hanson-Young said.

"We know there are hundreds of Iranian asylum seeker families here in Australia as well as on Nauru and many others on Manus Island who are fearful of what will happen to them if they are returned to Iran.

"I am extremely concerned about any agreement Julie Bishop may strike with the Iranian Government to deport vulnerable asylum seekers back to that country.

Ms Bishop's trip is a rare high-level visit from Australia to Iran as international nuclear talks with the country continue.