Iranians have been celebrating after world powers and Iran announced they had agreed the political framework for a comprehensive nuclear deal that will end years of crippling sanctions. 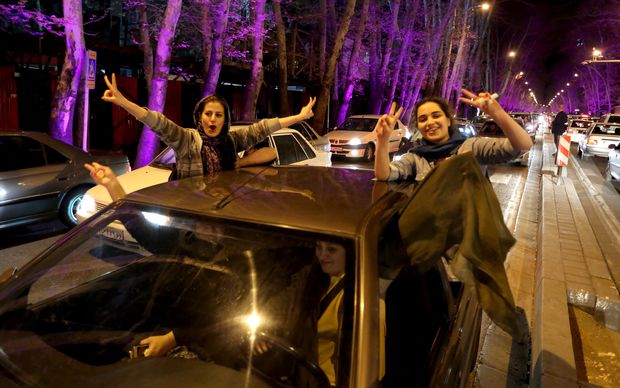 Women sitting in a car flash the "V for Victory" sign as they celebrate on Valiasr street in northern Tehran. Photo: AFP

The capital was unusually quiet as details of the breakthrough began to emerge on Thursday night, according to Thomas Erdbrink of the New York Times.

He put that down to many Iranians being glued to state television, which broadcast a live speech by a US president for what is believed to be the first time since the 1979 Islamic Revolution.

The ban on social media networks did not stop hundreds of posts online.

In a party. Most people have a glass in one hand and a mobile with an anti filter and Twitter on the other one. #IranTalks

And another one! Here's to your health #IranDeal Salamtiiiii pic.twitter.com/R9GVKAGed0

On Friday morning, Iranian Foreign Minister Mohammad Javad Zarif and his fellow negotiators were welcomed by crowds after flying back to Tehran from Lausanne, where the last round of talks were held.

While the reaction to the deal on social media appeared largely positive, some users argued that Iran could have done better. "The removal of the sanctions was good but it eventually ended against our interests," @RezaKhonsa wrote.

"Only Iranians celebrate a failure as a victory," said blogger Reza Parchizadeh.

Iranian conservatives meanwhile expressed their outright opposition. Some used the hashtag "#Lausanne_chay" to compare the political framework to the 1828 Treaty of Turkmenchay, which saw Iran lose many of its northern territories to Russia.

Google+ user SeyedMahdi mocked the political framework, writing (in Persian): "They have agreed that centrifuges at Fordo [nuclear site] will produce popcorn instead of enriching uranium."

There has so far been no reaction on Twitter by Iran's Supreme Leader, Ayatollah Ali Khamenei, who has the final say on all state matters.