Kenyan police say they have have arrested five suspects in connection with the massacre at Garissa University College.

Police searching the university found three students still hiding, plus a man who was not a student and is being treated as a suspect.

Meanwhile, Kenya is mourning those killed in Thursday's attack on Garissa university campus, amid questions over why warnings were ignored. 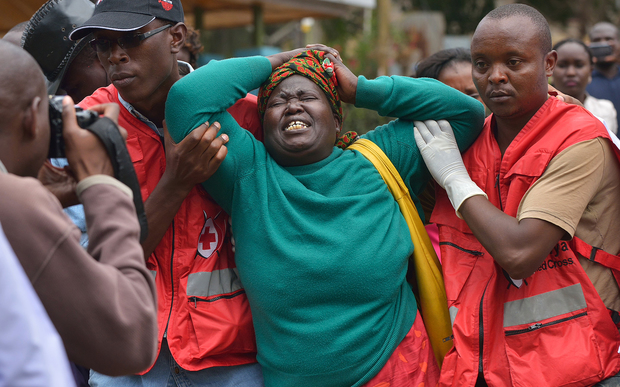 Red Cross members comfort a relative of one of those killed in the attack. Photo: AFP

Kenyan newspapers say there was intelligence information of an imminent attack on a school or university.

Locals question why security was not heightened, with only two guards on duty at the time of the attack.

Uganda is on heightened alert after police said they had received information of similar attack.

Security services appear to have had some information that an attack on an institution of higher learning was in the offing and appear to have warned institutions to be careful, the Daily Nation newspaper reports.

It said the university of Nairobi warned its students on 25 March that it had received intelligence information about a possible attack on a university and asked them to be vigilant.

Locals in Garissa, a city about 150km from the Somali border, also question why security was not boosted in light of the intelligence.

"It's because of laxity by the government that these things are happening. For something like this to happen when there are those rumours is unacceptable," said Mohamed Salat, 47, a Somali Kenyan businessman.

One of the survivors, who hid in bushes as the gunmen assaulted the campus, said the students had raised security issues late last year, but only two armed guards had been provided.

Another survivor, Helen Titus, told the news agency AP that one of the first things the gunmen did when they assaulted the campus was head for the lecture hall, where Christian students were gathered for morning prayer.

"They investigated our area. They knew everything," the 21-year-old said.

A dusk to dawn curfew has now been imposed in Garissa and three nearby counties.

In his address to the nation after the attack, President Uhuru Kenyatta said he had instructed the police chief to speed up the training of 10,000 recruits, because Kenya had "suffered unnecessarily due to shortage of security personnel".

Speaking after the attack in Garissa, Babu Owino, the chairman of the Students Organisation for Nairobi University, told AP news agency that the government's behaviour showed it was not serious in fighting extremist attacks.

Al-Shabab was also blamed for the Westgate Mall massacre in Nairobi in 2013 in which 67 people died, also after guards at the entrance were overwhelmed and people were held hostage inside.

The bodies of many of those killed in Garissa have been flown to the capital Nairobi for identification, as the local mortuaries have been unable to cope, and many of the students killed came from other parts of the country.

The masked attackers rampaged through the campus at dawn on Thursday, shooting and shouting "we are al-Shabab".

The heavily armed gunmen killed the two security guards first, then fired indiscriminately at students, many of whom were still asleep in their dormitories. They singled out Christians and shot them, witnesses said.

While many of the survivors speak to the media, little is known so far about those who were killed.

The gunmen were eventually cornered in a dormitory by Kenyan security forces. Four of them died when their suicide vests detonated. A fifth gunman was reportedly arrested. More than 500 students managed to escape.

Al-Shabab, which is linked to al-Qaeda, said it carried out the attack. The group says it is at war with Kenya, which sent troops to Somalia in 2011 to fight the militants.

The Kenyan government has offered a reward of $53,000 (£36,000) for the man it says planned the killing - Mohamed Kuno, a former Kenyan schoolteacher, now thought to be in Somalia.