An air strike has killed at least 40 people at a refugee camp in northwest Yemen, aid workers have said. 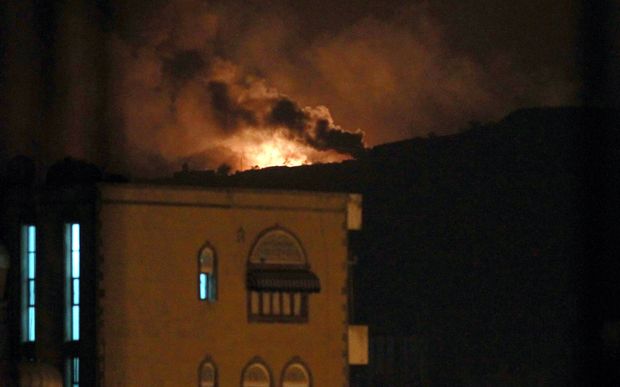 Smoke and flames rise from an alleged weapons storage depot at a Shiite Huthi rebel camp after the airstrike. Photo: AFP

A Saudi Arabian-led coalition has been targeting Shia Houthi rebels across the country in support of Yemen's embattled president, Abdabbuh Mansour Hadi.

Residents from the area around nearby were seen fleeing their houses after the explosions, eyewitnesses and military sources said.

Saudi naval forces have begun blockading Yemen ports to stop the movement of rebels and to prevent them bringing in arms, coalition forces said.

The al-Mazrak camp has been housing Yemenis displaced by the conflict between the Houthis and the central government since 2009.

The International Organization for Migration (IOM) said 200 people were also wounded in the al-Marzak bombing. It initially reported that 45 people died but revised this down to 40.

Aid agency Medecins Sans Frontieres (MSF) said 29 dead bodies and 34 injured people were taken to a hospital it operates near the camp.