A blogger has been hacked to death in the Bangladeshi capital, Dhaka, a month after a prominent atheist writer was killed in a similar attack. 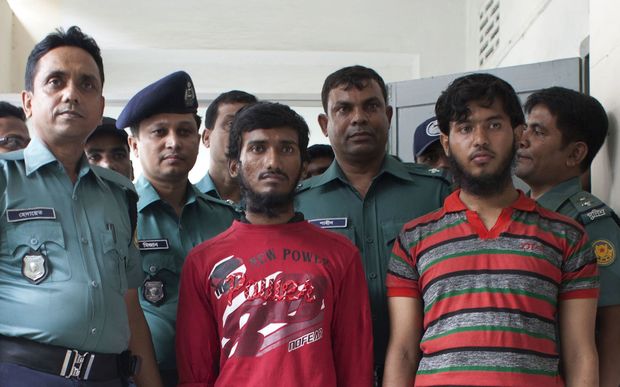 Two of the three suspected attackers were arrested minutes after the killing. Photo: AFP

Two students at an Islamic seminary have reportedly been arrested.

Last month, Avijit Roy, a US-based writer who had criticised religious intolerance, was killed in a machete attack while he was visiting Dhaka.

His death sparked fresh concerns for freedom of speech in Bangladesh, where several secular-minded writers have been targeted by militants.

Mr Rahman was killed on a busy street in Dhaka. Two of the suspected attackers, armed with meat cleavers, were caught near the scene.

The suspects told police they had targeted Mr Rahman because of his anti-Islamic writing, a police official told the Associated Press news agency.

Mr Rahman blogged under a pen-name, Kucchit Hasher Channa, or Ugly Duckling. According to the Dhaka Tribune newspaper, he had criticised irrational religious beliefs.

Imran Sarker, the head of a network of activists and bloggers in Bangladesh, told AFP news agency that Mr Rahman was "a progressive free thinker".

Asif Mohiuddin, a Bangladeshi blogger who survived an attack in 2013, said he had often talked to Mr Rahman about "criticising fundamentalist groups".

"I liked him for his satire, his sense of humour. He was a wonderful blogger and I'm very... upset right now," he said.

Last month's attack on Mr Roy prompted massive protests from students and social activists, who accused the authorities of failing to protect critics of religious bigotry.

A man accused of threatening to kill Mr Roy on social media was arrested in that case.

Farabi Shafiur Rahman, described as a "fundamentalist blogger", was said by police to be linked to Islamist group Hizb ut-Tahrir, which is banned in Bangladesh.

Mr Roy's wife was also badly injured in the attack.