They said the plane hit the ground in the French Alps at great velocity, suggesting no explosion in flight.

Flight 4U 9525 from Barcelona to Duesseldorf crashed after an eight-minute rapid descent on Tuesday.

The French, German and Spanish leaders visited the crash site on Wednesday. 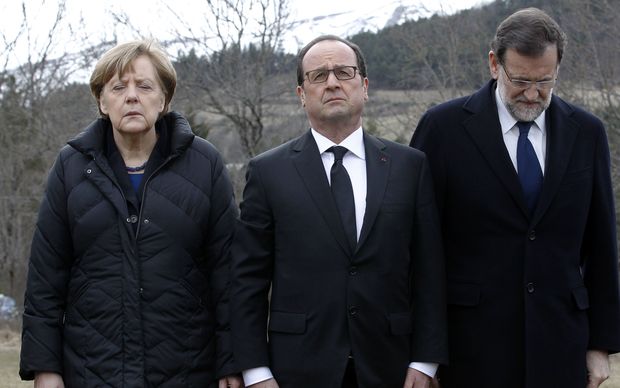 Remi Jouty, the director of the French aviation investigative agency, said there were sounds and voices on the cockpit voice recorder but that it was too early to draw any conclusions.

He said he hoped investigators would have the "first rough ideas in a matter of days" but that the full analysis could take weeks or even months.

There had been earlier reports that the second black box - the flight data recorder - had been found. But Mr Jouty said this was not the case.

Mr Jouty said the plane's last communication was a routine one with air traffic control.

The plane confirmed instructions to continue on its planned flight path but then began its descent a minute later.

Mr Jouty said controllers observed the plane beginning to descend and tried to get back in contact with the pilots but without success.

He ruled out an explosion, saying: "The plane was flying right to the end."

Germanwings chief Thomas Winkelmann said 72 of the 144 passengers were German citizens. The victims included 16 pupils returning from an exchange trip. Spain's government now says 51 of the dead were Spanish.

UK Foreign Secretary Philip Hammond confirmed that three Britons were on board. Other victims were from Australia, Argentina, Iran, Venezuela, the US, the Netherlands, Colombia, Mexico, Japan, Denmark and Israel.

However, there may be some duplication because of dual citizenship. 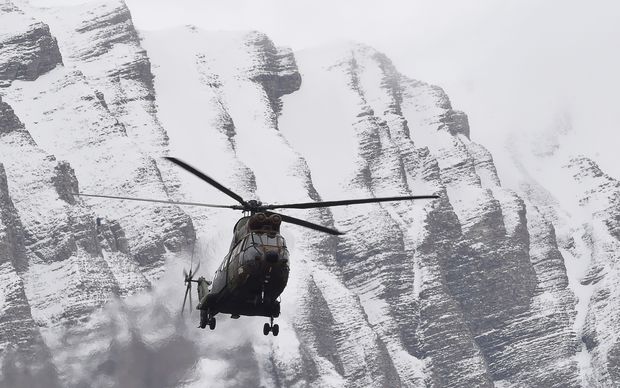 A helicopter scours the scene of the crash. Photo: AFP

Mr Hollande told his counterparts: The French people are here shoulder to shoulder with you during this ordeal. Everything will be done to find, identify and hand back to the families the bodies of their loved ones."

Both he and Mrs Merkel said they would do everything they could to find the cause of the crash.

Spain has declared three days of national mourning for the victims.

The deaths of 16 teenage students and two young teachers in the plane crash in the French Alps has left the German lakeside town of Haltern am See in a state of shock.

The tranquil and tidy town of 37,000 came to a halt after news of the crash.

The 16 German students, all about 15 years old, had started learning Spanish at the start of the school year and were from Joseph-Koenig school in Haltern.