The world's most extensive island rat eradication has been completed with a final load of bait dropped on subantarctic South Georgia Island from a helicopter.

The flight was made by New Zealand pilot Peter Garden and the bait dropped using a specialised spreader developed and made in New Zealand. 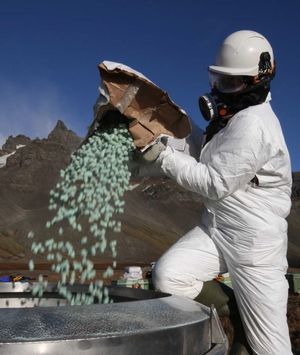 That the huge operation on the British territory off the southern tip of South America was possible at all was the result of 50 years of techniques and experience developed on New Zealand islands.

The eradication over 100,000 hectares was eight times larger than the previous largest on Australia's Macquarie Island.

"They didn't just do an incremental change - they did a step change. They moved from 11,000 hectare Campbell Island and 13,000 hectare Macquarie Island, they just grabbed the bull by the horns and went for it."

It all began in 1964, when the late Don Merton and fellow conservationists declared that they had got rid of Norway rats on tiny Maria Island, in the Hauraki Gulf. At that time just 0.5 percent of New Zealand islands were free of mammalian pests; today, 10 percent are pest-free.

Following Maria Island, conservationists began to tackle larger and larger islands, such as 170 hectare Breaksea Island in Fiordland and then 2000 hectare Kapiti Island.

When Norway rats were eradicated from remote Campbell Island in 2001, it was a monumental conservation achievement that suddenly opened up the possibility of restoring large islands around the world.

Its team used five helicopters with specialised bait-spreading buckets and GPS to distribute bait containing rodenticide Brodifacoum across the entire island, including the steep cliffs. 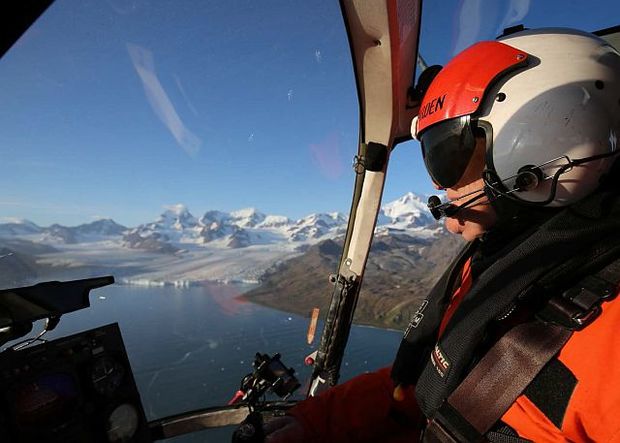 On South Georgia, the area from which rats had to be removed was so large the programme had to take place in three stages over five years.

And it has been a race against time to get it completed before global warming melts the large glaciers that effectively divide the island into a number of ice-free valleys.

Research into the genetics of rats living in different valleys carried out by Bruce Robertson and Neil Gemmell from the University of Otago confirmed they were all distinct populations.

That meant these ice-free areas could be treated as 'eradication units', allowing the pest removal to be done as a 'rolling front'. Bait was dropped in a few areas in a trial carried out in 2011; a much larger number of units treated two years later, and the third and final bait drop treating the remaining ice-free valleys in February and March 2015.

The idea of a rolling front was developed on Ulva Island in the 1990s and, according to University of Auckland biologist James Russell, the technique is important. "It's going to be the kind of approach that will be required to treat larger islands in future, and perhaps even scale up to a predator-free New Zealand." 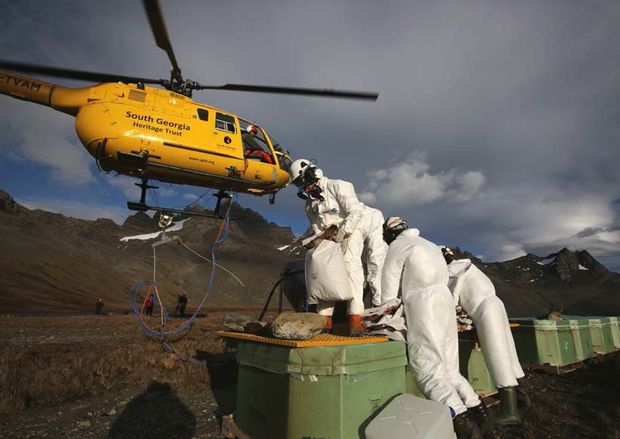 The restoration programme was organised by the South Georgia Heritage Trust, which has raised more than £7.5 million.

Peter Garden has made significant contributions to many island eradications, beginning with Campbell Island.

"He's certainly one of the top eradication pilots in the world. Both his flying skills, and also the work he puts in planning and preparing for these operations."

It will be two years before the valleys treated with bait this year can be checked to confirm whether the eradication has been a success.

But there are already signs that areas treated in 2011 are now rat-free, with the first confirmed nest of the threatened South Georgia pipit found in January 2015.

The next job of Team Rat, as they call themselves, is to head to the valleys treated in 2013, to see whether the rat detection devices left there last summer give any indication of the presence of mice.

South Georgia Island is 170 kilometres long, between 2 and 40 kilometres wide, and rises to 2,934 metres at its highest. About three quarters of the island is covered in glaciers and snow fields, and apart from a brief snow-free summer period, it is usually covered in snow to sea level.

At latitude 54°S, South Georgia is further south than New Zealand's Campbell Island (52°S). The island is now uninhabited, about from two British Antarctic survey bases, but at the height of the whaling boom it was home to about 2000 people.