The foreign ministers of China, Japan and South Korea are meeting for their first talks in three years. 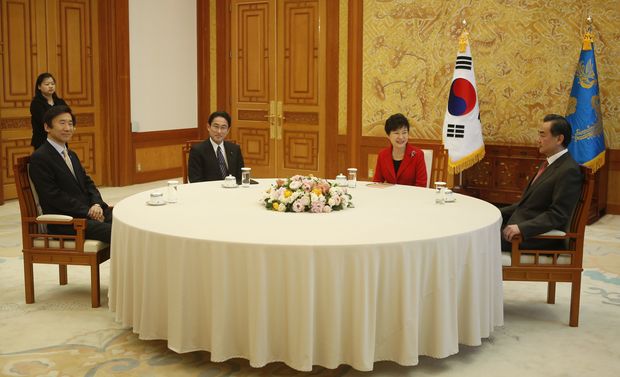 The meeting in Seoul is likely to focus on ways to ease regional tensions over territorial and diplomatic disputes.

The three states have strong economic ties but relations still suffer from unresolved issues dating back to Japan's actions in World War Two.

A Chinese foreign ministry spokesman said he hoped the ministers would be able to "look forward into the future".

Foreign ministers from the three countries last met in April 2012, for their sixth annual trilateral meeting.

It was cancelled the following year after Japanese Prime Minister Shinzo Abe angered China and South Korea by visiting a shrine that honours Japan's war dead, including a number of senior war criminals.

Japan colonised the Korean peninsula and occupied parts of China during World War Two and both countries have accused Tokyo of failing to adequately atone for its aggression.

Mr Kishida met his South Korean counterpart ahead of the trilateral meeting, and said that "despite difficult issues between the two countries", the two sides would "continue communicating at various levels in order to strengthen our co-operation".

The BBC said differences do remain but the anger of three years ago has cooled, so the meeting is a tentative step back towards formal dialogue.

The resumption of the foreign ministers' meeting has fuelled hopes that a summit of the counties' three leaders could be held later this year.

The poor relationship between Japan and South Korea has become a concern for the US, which sees the two countries as its main military allies in Asia.

Last week, US Assistant Secretary of State Daniel Russel described the tension between its "two friends" as a "strategic liability".

Those discussions are believed to have centred on the creation of a maritime communication hotline between the countries, following tensions over islands in the East China Sea.

There have been several disputes in recent years over the islands, known as Senkaku in Japan and Diaoyu in China, and officials have expressed fears that a clash could trigger a full-blown conflict.

Analysts say the situation has not been helped by Japan re-interpreting its pacifist constitution to allow it to use force for "collective self-defence". China accused Japan of using the change to "remilitarise".