While the rest of the world looked up to the night sky, NASA astronaut Terry Virts took a glimpse outside of the International Space Station to capture the glow of this week's cosmic display.

Mr Virts, an American, witnessed the impressive light show of aurora borealis as the space station travelled above the North Pole and Russia.

The northern lights, as they are also known, are the result of collisions between the Earth's gaseous particles and matter released by the Sun's atmosphere.

Astronomy enthusiasts have been spoilt this week with aurora australis, or the southern lights, putting on a spectacular show in the southern hemisphere on Tuesday night. 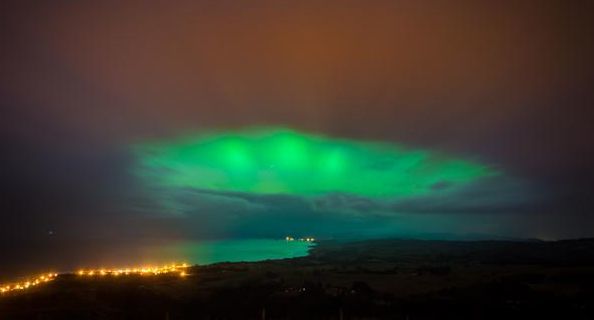 A view of the Aurora Australis on the Brighton coast, south of Dunedin, on 17 March 2015. Photo: Paul Le Comte

According to the Australian Bureau of Meteorology, auroras are "caused when electrically charged electrons and protons accelerate down the Earth's magnetic field lines and collide with neutral atoms in the upper atmosphere - usually about 100 kilometres above the Earth".

"These collisions cause the neutral atoms to fluoresce, emitting light at many different wavelengths," it said on its website.

Red and green are the most common shades to feature in auroras and are caused by the fluorescence of oxygen atoms, while blues and purples can appear when nitrogens atoms are at work.

For those out of sight of the impressive display, all was not lost as social media lit up with photos of aurora australis.

#Aurora 5am #Dunedin this morning ;-) @Lovedunedin from Saddle Hill pic.twitter.com/ogjTPobkDY

wow - just wow. First all nighter in years & totally worth it, till the rain sent me packing at 6am. Best #Aurora in a decade #dunedin

The beams were like skyscrapers in the sky. Was amazing to see. pic.twitter.com/pq3JUabj1S

Aurora Australis & the International Space Station in one photo. Queenstown can sure put on a show! pic.twitter.com/1tSIVy3ZEG