An online petition calling for the BBC to reinstate Top Gear presenter Jeremy Clarkson has been signed by 400,000 people in two days.

Clarkson, 54, was suspended after what the BBC has called a fracas with one of the show's producers.

BBC director-general Tony Hall said an investigation was going on to "gather the facts" about the incident.

Sunday's episode of Top Gear will not be shown and it is understood the two final episodes in the series will also be dropped. 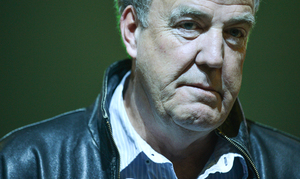 Clarkson, renowned for his outspoken remarks and acerbic attitude towards "political correctness", was suspended on Tuesday, with media reporting that he had thrown a punch at a producer, Oisin Tymon, following a row about food.

"I'm off the to the job centre," the presenter joked to reporters on Wednesday before getting into a car outside his home in west London.

Clarkson was already on a final warning over accusations last year that he had used racist language while filming the show, the latest in a long line of controversial incidents involving the host.

"He's been involved in a bit of a dust-up but I don't think it's that serious," co-presenter James May told the BBC.

Top Gear airs in more than 200 countries and is estimated to have a global audience of some 350 million, it is one of the BBC's most successful and lucrative programmes.

Clarkson became the popular face of Top Gear by mixing a passion for cars with blunt banter and swagger that has offended groups ranging from mental health charities and cyclists to Mexico's London ambassador.

The presenter and his employers have been forced to apologise on a number of occasions. He wrote in his Sun newspaper column in May that he had been told by the BBC that if he made "one more offensive remark, anywhere at any time, I will be sacked".

The online petition in support of Clarkson - set up by political blogger Guido Fawkes - was nearing half a million signatures less than 24 hours after it was launched on Tuesday afternoon.

Meanwhile, a petition for the BBC to sack Clarkson has been signed by just 2000 supporters.

Clarkson in February indicated he might have been unhappy with the show by tweeting: "Wanted: new presenter for Top Gear. Applicant should be old, badly dressed and pedantic but capable of getting to work on time."