A passenger airliner has skidded off the runway at LaGuardia airport in New York City amid snowy conditions. 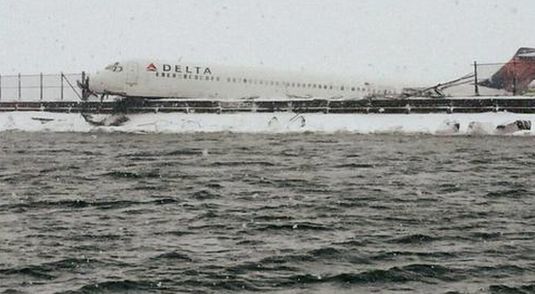 Emergency officials were called to the airport at about 11am (local time) but no major injuries have been reported.

Local media pictures appeared to show the plane, a Delta MD-88, had pushed past the airport fence.

Delta Air Lines said passengers left the plane via aircraft slides and were being brought to the terminal by bus.

Heavy snow had been falling in New York since earlier this week.

The flight had landed at LaGuardia after flying from Atlanta, but then slid off the side of the runway.

The airport has been closed, and is expected to reopen at 19:00 local time, Federal Aviation Administration (FAA) said.

Joe Pentangelo, a spokesman with the Port Authority of New York and New Jersey, said the plane was apparently leaking fuel.

A safety barrier was added to the end of a runway in 2005, which is designed to slow or stop a plane that overruns the runway.

But the plane instead veered off the runway and into the barrier separating the airport from Flushing Bay.

LaGuardia is one of the most difficult airports to land at in the US to due its close proximity to three other busy airports.