British Prime Minister David Cameron has said that British military personnel are to be sent to Ukraine in the next few weeks to provide advice and training. 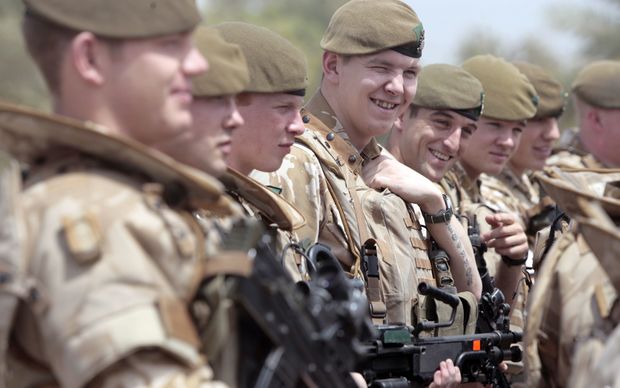 British soldiers are to be sent to Ukraine in the next few weeks. Photo: AFP

As he spoke, pro-Russian rebels said they were pulling back heavy weapons from the front line in eastern Ukraine as part of a ceasefire.

However, the government in Kiev has disputed the rebel claims.

Mr Cameron said he would push for more sanctions on Russia if the separatists failed to observe the truce.

The prime minister told a House of Commons committee that up to 75 British soldiers divided into four teams would go to an area well away from the conflict zone to provide medical, logistics, intelligence and infantry skills.

In a statement, British Defence Secretary Michael Fallon said that the move was a result of "continued Russian-backed aggression".

The United States has already said it is planning to send a battalion of soldiers to train three Ukrainian battalions.

Foreign ministers from Russia, Ukraine, Germany and France met in Paris on Tuesday in an attempt to bolster confidence in the ceasefire agreed in Minsk on 12 February. They made little progress, reports said.

Ukraine fears that the separatists are planning to use the relative lull in fighting to switch their attention to the southern port city of Mariupol.

Following talks in Paris, Ukrainian Foreign Minister Pavlo Klimkin told reporters: "We are extremely concerned by recent attacks in the vicinity of Mariupol. We are concerned by a possible relocation of forces from Debaltseve in the direction of Mariupol."

International monitors say they cannot confirm the withdrawal of the rebel weaponry in the east, though movement of artillery columns has been reported.

Monitors at the Organization for Security and Co-operation in Europe say it is not possible to verify the pullout as they do not know the amount of weapons removed or where they have been taken.

Meanwhile, US Secretary of State John Kerry accused Russia of repeatedly lying about their involvement in Ukraine.

"And they have been persisting in their misrepresentations [or] lies, whatever you want to call them, about their activities there to my face," Mr Kerry told a Senate Committee.

Almost 5,800 people have died since the fighting in Ukraine erupted last April, the UN has estimated, although the organisation believes the real figure could be considerably higher.