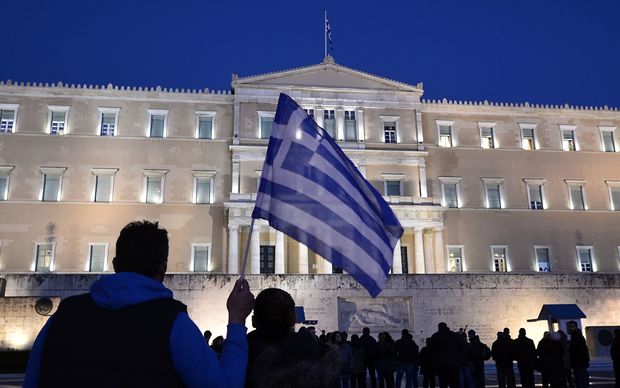 A man holds a Greek flag in front of the Greek parliament in Athens as people gather in support to their government. Photo: AFP

Dutch finance minister Jeroen Dijsselbloem, head of the Eurogroup, said that Athens had pledged to honour all its debts.

"This is a very positive outcome," he told a news conference on Friday night.

"I think tonight was a first step in this process of rebuilding trust. As you know trust leaves quicker than it comes. Tonight was a very important, I think, step in that process," Mr Dijsselbloem said.

Greece had agreed to present an initial list of reform measures by Monday, he added.

Athens welcomed the deal, which a Greek government official said gave it time to negotiate a "new deal".

"Greece has turned a page," the official said. "We have avoided recessionary measures."

Greece had been seeking a six-month extension of the bailout but the Eurogroup opted for four months.

Christine Lagarde, head of the International Monetary Fund, said: "We are pleased that work can actually begin."

She was involved in talks between the Greek and German finance ministers on Friday afternoon that helped pave the way for the deal.

The euro gained against the US dollar on Friday following the announcement, adding 0.3 percent to $US1.1403, while the Dow Jones industrial average and S&P 500 struck new intraday highs.

Sebastien Galy, a foreign exchange analyst at Societe Generale, said: "It certainly looks like we're moving away from disaster. It should help a stress that has been building up in the market to be released."

The agreement removes the immediate risk of Greece running out of money next month.

It also provides a breathing space for the new Greek government to try to negotiate longer-term debt relief with its EU creditors.