A mysterious haze high above Mars has left scientists scratching their heads.

The vast plume was initially spotted by amateur astronomers in 2012, and appeared twice before vanishing, the BBC reports.

Scientists have now analysed the images and say that the formation, stretching for more than 1000 kms, is larger than any seen before.

Writing in the journal Nature, the researchers believe the plume could be a large cloud or an exceptionally bright aurora.

However, they are unsure how these could have formed in the thin upper reaches of the Martian atmosphere.

Around the world, a network of amateur astronomers keep their telescopes trained on Mars.

They first spotted the strange plume in March 2012 above Mars' southern hemisphere.

Damian Peach was one of the first stargazers to capture images of the phenomenon.

"I noticed this projection sticking out of the side of the planet. To begin with, I thought there was a problem with the telescope or camera.

"But as I checked more of the images, I realised it was a real feature - and it was quite a surprise," he told the BBC. 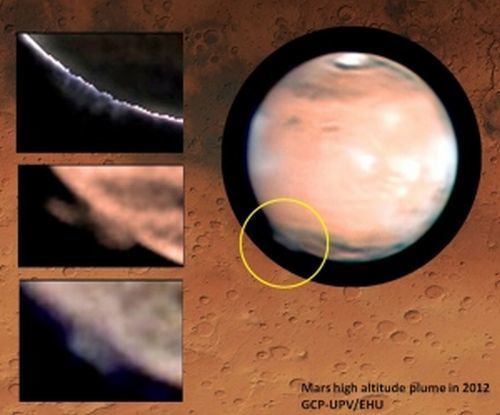 The vast, bright haze lasted for about 10 days. A month later, it reappeared for the same length of time. But it has not been seen since.

An international team of scientists has now confirmed the finding, but they are struggling to find an explanation.

One theory is that the plume is a cloud of carbon dioxide or water particles.

Antonio Garcia Munoz, a planetary scientist from the European Space Agency said science's understanding of the planet's upper atmosphere could be wrong.

"We know there are clouds on Mars, but clouds, up to this point, have been observed up to an altitude of 100km," Dr Garcia Munoz said.

"And we are reporting a plume at 200km, so it is significantly different. At 200km, we shouldn't see any clouds, the atmosphere is too thin - so the fact we see it for 20 days in total is quite surprising."

Another explanation is that this is a Martian version of the northern or southern lights.

Dr Garcia Munoz hoped that by publishing the paper, other scientists might also come up with explanations.

If they cannot, astronomers will have to wait for the plumes to return.

Close-up observations from telescopes or the spacecraft that are currently in orbit around the Red Planet could help to solve this Martian mystery.