The release of two Al Jazeera journalists by a court in Egypt is only a first step and their names must be cleared, the mens' employers in Doha say. 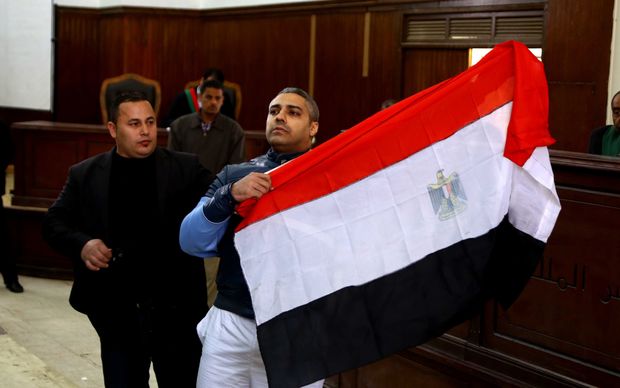 There were cheers when the judge at Cairo Criminal Court announced at the start of the retrial that Mohamed Fahmy and Baher Mohamed would be freed on bail.

Their Australian colleague, Peter Greste, was released last week under a law allowing the deportation of foreign nationals to their home countries. Mr Fahmy has given up his Egyptian citizenship to qualify for deportation to Canada, but Mr Mohamed has no foreign passport.

The three were accused of helping Egypt's outlawed Moslem Brotherhood and sentenced to up to 10 years in prison, but an appeals court ordered a retrial.

Kamahl Santamaria, a news anchor for Al Jazeera in Doha, told Morning Report their release from prison is a great start for his colleagues.

"It is not over until these three men, including Peter, are cleared of all the charges and acquitted because they should never have been charged in the first place. The retrial should right that."

At the start of the hearing, Mr Fahmy and Mr Mohamed were led into a soundproof glass cage - which allows judges to limit defendants' ability to protest or interrupt proceedings, the BBC reports.

Mr Fahmy - his arm in a sling because of an injury he suffered before his arrest in December 2013 - was later allowed out of the dock to address the court.

"A security official visited me and asked I drop my citizenship because the state wanted to get this case done with, it had become a nightmare," he said before unfurling an Egyptian flag.

After a brief recess, Judge Hassan Farid adjourned proceedings until 23 February and ordered that the two men be released, along with 11 other defendants - most of them students - charged with involvement with a terrorist group.