Australian electricity company AusNet has announced a $A300 million settlement with the Marysville victims of the Black Saturday bushfires in 2009.

The agreement, which is subject to court approval, came on the eve of the sixth anniversary of the bushfires and just before a class action trial was due to begin in Victoria's Supreme Court. Burnt out forest on the road leading to Marysville, northeast of Melbourne, on 9 February 2009 Photo: AAP

Forty people died and an estimated 500 homes were destroyed when the blaze, also known as the Murrindindi fire, broke out on 7 February 2009.

The class action, run by law firm Maurice Blackburn, alleged the fire was sparked by a break in an electrical conductor on a power pole near the Murrindindi Saw Mill.

But the company has denied its power lines were to blame.

In a statement to the Australian and Singapore stock exchanges the company said:

"The settlement is without admission of liability by AusNet Services or any other party". 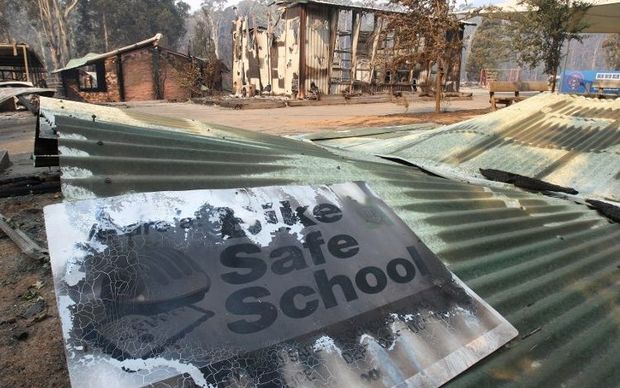 The town of Marysville in Victoria was destroyed in the February 2009 bushfires. Photo: AFP

Brooke Dellavedova, a lawyer representing the victims, told the ABC the result meant about 1100 claims would be compensated.

"Assuming the court approves the settlement, those people will put in claims, we'll assess the claims and work out compensation for them," Ms Dellavedova said.

"It doesn't change the fact that it happened but it does help people start to rebuild."

The company's general counsel and company secretary, Susan Taylor, outlined the details of the settlement in a statement.

AusNet will pay more than $A260 million, maintenance company Utility Service Providers will pay $A10 million and the Victorian Government will contribute $A29 million.

AusNet said the total losses suffered by those affected by the Murrindindi bushfire had not yet been finalised.

In court, Justice John Dixon described the proposal as a sensible and necessary compromise.