An Egyptian court has sentenced 183 supporters of the outlawed Muslim Brotherhood to death on charges of killing police officers, as authorities continue their crackdown on Islamists. 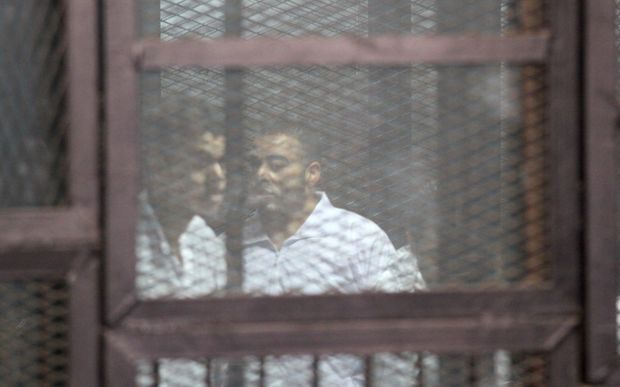 Some of 183 people who were sentenced to death after being found guilty of killing 11 policemen are seen in glass cages at the Tora Prison in Cairo, Egypt on February 02, 2015. Photo: AFP

The men were convicted of playing a role in the killings of at least 11 policemen in the town of Kardasa in August, 2013.

The attack took place after Egyptian military forces cracked down on Islamist supporters of ousted President Mohammed Morsi that July.

Hundreds of death sentences have been passed on Mr Morsi's supporters but none has been carried out, the BBC reported.

More than 140 of the 188 defendants in the Kerdasa case are already in custody, while the rest have been sentenced in absentia.

The court also sentenced a minor to 10 years in prison in the case, and two other defendants were acquitted.

The verdict follows a recommendation by Egypt's top religious authority, the Grand Mufti, but it can be appealed against.

The decision comes the same week Al-Jazeera journalist Peter Greste left Egypt after more than a year in prison on charges that included aiding the Muslim Brotherhood.