A gas truck explosion at a maternity hospital on the western edge of Mexico City has killed one woman and a child and left dozens injured.

The explosion destroyed around 70 percent of the hospital and injured 66 people, 22 of them seriously, Mexico City Mayor Miguel Angel Mancera said. 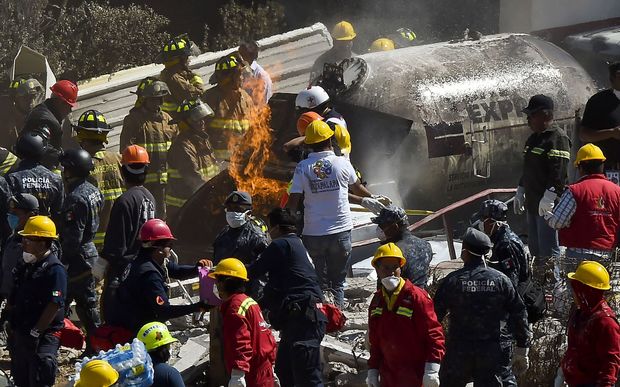 Rescuers work amid the wreckage caused by an explosion in a hospital in Cuajimalpa, Mexico City. Photo: AFP

Three people have been detained for their roles in the gas truck explosion, and two of them have been hospitalized, he added.

Several babies were found alive under the rubble. Scores of rescue workers continued digging through the concrete and twisted metal for survivors.

The head of national emergency services earlier said seven people had died, but the death toll was revised down by Mr Mancera.

People seeking information on family members gathered around police lines that were set up to keep bystanders away from the chaotic scene.

Some of the injured were evacuated by helicopter, and aerial footage showed firefighters scrambling over the skeletal wreckage of the building.

Ambulances waited at the scene to treat survivors. Around 100 people were in the hospital at the time of the explosion, according to a city official.

A leak in a hose from the truck, which was fuelling the hospital's tanks, was believed to have triggered the explosion, officials said.

Many areas of Mexico City have no mains gas supply, and rely on deliveries from gas trucks. Mancera said the gas truck company involved had been working in Mexico City since 2007.