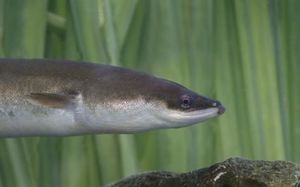 The European eel is classified as a critically endangered species. Photo: 123rf

Two Chinese men arriving from Madrid were detained at Sofia airport for trying to smuggle the eels in eight containers.

Officials said that the tiny eels, known as elvers, had been declared as food items.

The European eel was classified as a critically endangered species and cannot be exported outside the region.

Their sale is also heavily regulated within the EU.

The eels had been placed in bags filled with water and are believed to have been worth several thousand euros.

A rescue centre at an aquarium in the coastal city of Varna have taken them in.

The European eel was protected by an international agreement and trading in the species without a permit is forbidden worldwide.