An Egyptologist says a shoddy repair job is spoiling one of the world's best-known ancient artefacts, but hopes the damage is reversible. 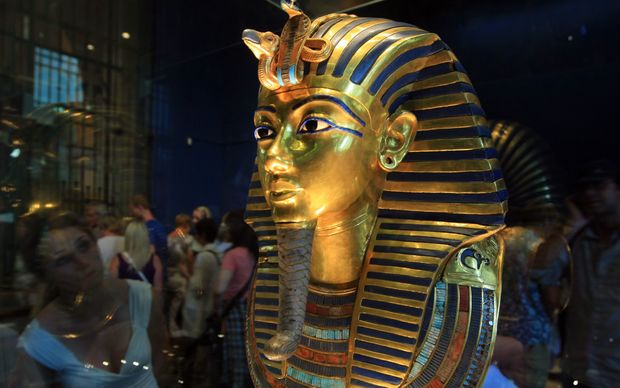 Officials at the Egyptian Museum, Cairo, said the blue and gold braided beard from the burial mask of the Pharaoh, Tutankhamun, was broken off and stuck back on with quick- drying glue, late last year.

It was not clear whether the mask was damaged during cleaning or if the beard was removed because it was loose.

The 3,000-year-old artefact, with other relics from the boy king's tomb, were among Cairo's biggest attractions.

The director of the Egyptian Museum, Mahmoud Al Hawagi, confirmed to the BBC that a translucent adhesive material had appeared on the burial mask.

An inquiry was under way into what happened to the country's greatest treasures.

Instead of being taken to a conservation lab, the repair was performed quickly to put the mask back on display, conservators said.

The conservators spoke on condition of anonymity, but they agreed that orders for a quick fix must have come from above.

Director of the Egypt Exploration Society in Britain, Chris Naunton, said it was difficult to tell how bad the damage was.

He said the mask looked messy at the moment but hoped it would be able to be fixed up after it was properly inspected.

"The theory is that the beard became detached, someone panicked and tried to re-attach it rather hastily with some inappropriate glues and didn't do a very tidy job of it."

He said the efforts to the repair the mask were quite evident and it was spoiling the mask.

He said that up until that point it was one of the most "perfectly beautiful objects passed down from ancient times".

It was claimed that this was an irreversible process, but he said that was unlikely.

The Egyptian Museum was among Cairo's top tourist sites, but in some areas ancient artefacts lie unprotected from the public, the BBC reported.

Egypt's tourist industry, once a key source of revenue, had yet to recover from the years of turmoil that followed the overthrow of former President Hosni Mubarak in 2011.

Tutankhamun's burial mask was discovered in 1922 along with the pharaoh's nearly intact tomb and sparked world-wide interest in archaeology and ancient Egypt.