US experts are scratching their heads after finding a more than 130-year-old Wild West rifle leaning against a Juniper tree in a remote area of a national park. 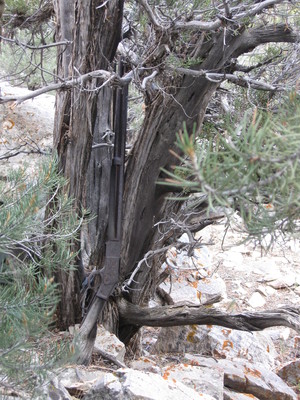 The 130-year-old rifle was found leaning against a Juniper tree. Photo: AFP / The National Park Service

The Winchester Model 1873 firearm was found in Great Basin National Park in Nevada by a park employee, Eva Jensen, who happened to be working in the area with an archaeology team.

Exposed for years to the elements, the rifle's cracked wood stock was "weathered to gray," while the brown rusted barrel "blended into the colors of the old Juniper tree," officials said.

Tucked into a remote rocky outcrop, the rifle appeared to have remained "hidden for many years," they added in a statement.

The gun's serial number indicates that it was made and shipped in 1882. But beyond that it remains a mystery.

"Who left the rifle? When and why was it leaned against the tree? And why was it never retrieved?" the statement said, adding that experts were poring over old newspapers and family histories to search for where it may have come from.

The Winchester Model 1873 rifle holds a prominent place in local history - referred to as "the gun that won the West."

The gun was not loaded when it was found, but would have held .44-40 caliber ammunition when in use.