Tens of thousands of police officers have filled a New York church and nearby streets for the funeral of Rafael Ramos, one of two officers shot dead as they sat in their patrol car a week ago. 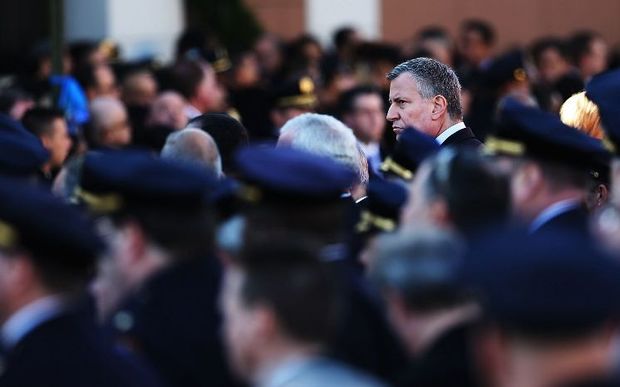 Mr Ramos and Wenjian Liu were killed by a man who said he was avenging the killing of unarmed black people by police.

When mayor of New York City, Bill de Blasio, began delivering a eulogy, thousands of uniformed officers watching large screens outside the church silently turned their backs on him in a pointed display of protest.

There has been widespread police anger at Mr de Blasio's qualified support for nationwide demonstrations over the deaths of unarmed black men at the hands of police.

The funeral was also attended by US vice-president, Joe Biden.

Streets outside the church were filled for blocks with crowds of officers in blue uniform, including delegations from Boston, Atlanta, St. Louis and New Orleans.

A police spokesman said the department did not estimate the number of people who attended department funerals but some 25,000 people were thought to have gone.

The officers' killer, Ismaaiyl Brinsley, 28, fatally shot himself soon after the attack, and had earlier that same day shot and wounded his former girlfriend in Baltimore.

Brinsley, who was black, had written online that he wanted to kill police to avenge the deaths of Eric Garner and Michael Brown - unarmed black men killed by white policemen in New York and Ferguson, Missouri.

Their deaths and the decisions not to prosecute the officers responsible ignited nationwide protests, renewing a debate about race in America that has drawn in President Barack Obama.