On a flattened landscape in Banda Aceh, surrounded by debris, the Baiturrahman Mosque stood tall. 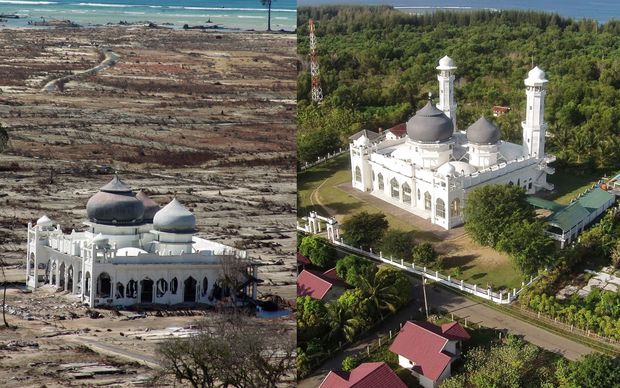 Two photos of the January Baiturrahman Mosque - the picture on the left was taken on 16 January 2005 and the photo on the right was taken on 1 December 2014. Photo: AFP

In the days that followed the devastating 2004 tsunami, the mosque provided shelter for the displaced and refuge for those who wanted to pray.

A slight tilt and some cracks in the minaret were the only evidence of what it endured when a massive 9.1 magnitude quake off the coast of Aceh triggered a tsunami in the Indian Ocean.

It was one of the deadliest disasters in recorded history and of the 230,000 people who died, more than 170,000 were from Aceh.

Aloysius Suratin, deputy country director for Oxfam in Indonesia, said 10 years on the area had sprung back to life, the ABC reported.

"After a decade I must say now the situation is already back to normal. They worked hard to rebuild," he said, but added that people were deeply scarred.

"The victims of the disaster they lost their family members, they lost all their goods and their source of livelihood. 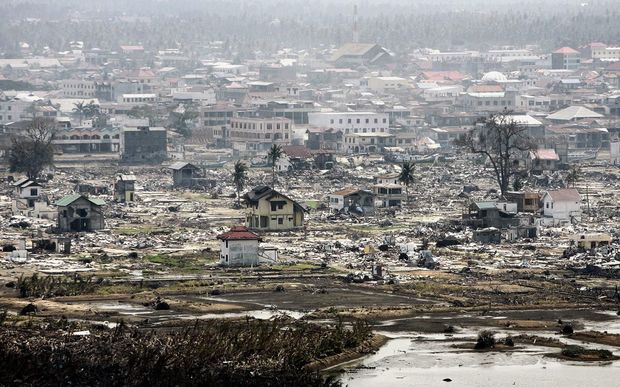 A view of the devastated town of Lampuuk following the tsunami. Photo: AFP

"But the worst thing, the difficult thing is to accept that you don't have your family members. This is the highest loss faced by the victims of the disaster."

That the Baiturrahman Mosque survived, along with many other mosques in the province, is often attributed by locals to divine intervention.

The mosque was built in the late 19th century by the Dutch colonisers after they destroyed the original mosque when they invaded in 1873.

It was spurned by worshippers for its colonial origins, but now it is the pride of Aceh.

Thousands of people have gathered at the site to mark the tenth anniversary of the disaster.

Ten years ago, cleric Din Syamsuddin stood in the mosque in the devastating days after the tsunami and told worshippers that Aceh must rebuild.

"We are still very sad now, but according to our belief we must restore prosperity and work for a better future," he said.

In the years that followed, Aceh's decades-long civil war came to an end and authorities began the slow and difficult work of reconstruction.

Today, Baiturrahman Mosque stands as a testament to Aceh's survival. 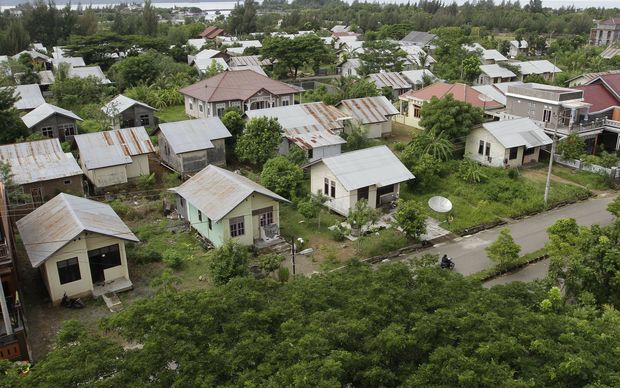 A recent photo of the view of Lambung village. Photo: AAP

"They say the mosque that is still there, for them it is like a miracle.

"This is the first word if you communicate with them about [it]."

He said the tragedy had shaped the area.

"The tsunami has really affected the way [people in] Aceh face life," he said.

"They realise the limitedness of human beings ... all you have in life can disappear in a second.

"They are the witness of this traumatic situation ... so people have a strong bond with each other with this collective memory."

Commemoration ceremonies were also due to take place across the region later today.

A New Zealand scientist said the 2004 Boxing Day tsunami had resulted in a better understanding of how tsunamis happen and how they could be better planned for.

Geonet Project Director at GNS Science Ken Gledhill said over the past decade, a huge amount of research had gone into understanding what causes tsunamis.

And he said tsunami warning systems for the Pacific had changed considerably as a result.

"Once we've detected the quake and know it's happened, we're likely model whether it's likely to cause a tsunami, and not just that, but up to how bad that tsunami is likely to be right around the Pacific in our case."