A storm caused delays and brought down trees and powerlines across the Sydney metropolitan area yesterday, while lightning sparked a fire at an inner-city substation. 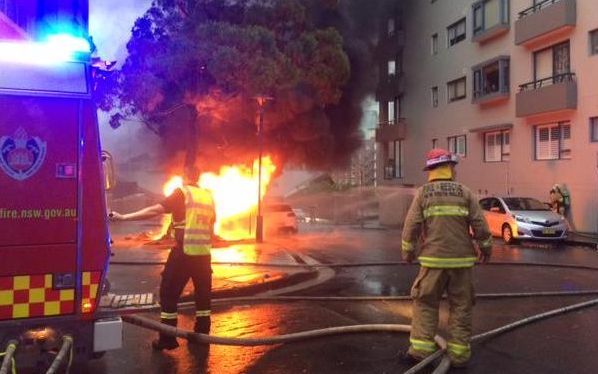 Firefighters work to contain a fire at an substation in Sydney. Photo: Twitter / Fire and Rescue NSW

Heavy rain, flooding and power outages were also reported across much of New South Wales after the wild weather, the ABC reported.

Last night, NSW Fire and Rescue said it had 80 crews out responding to reports of damage in Sydney's metro area.

The storm front moved from the south west to the north east before heading out to sea.

A lightning strike near Richmond disrupted train services on the Western line.

Another lightning strike started a fire in an electrical substation at Pyrmont in inner Sydney.

Twenty-five units were evacuated as a result.

More than 13,000 homes were without power across the state yesterday.

Residents in the Blue Mountains, Hawkesbury, Southern Highlands and Western Sydney were the worst hit.

Rain hampered the efforts of power crews sent to repair the electrical grid.

The tarmac at Sydney Airport was closed for about half an hour during the height of the storm and reopened about 6:40pm (local time).

Mark Iselin, from Brisbane, was on Virgin Australia flight VA958 from Brisbane which landed shortly before the runways were closed.

He said the turbulence was "probably as bad as I've ever been through".

He said the turbulence lasted up to 30 minutes and it appeared the pilot was forced to make a number of approaches before landing.

"I was looking out and we moved past the same area three times and then landed on the fourth," he said.

"I think he [the pilot] was accelerating to get out of the worst part of it.

"There was a girl behind us - she was white [with fear]."