A wife and daughter of Islamic State leader Abu Bakr al-Baghdadi were detained by the Lenanese army while crossing from Syria nine days ago. 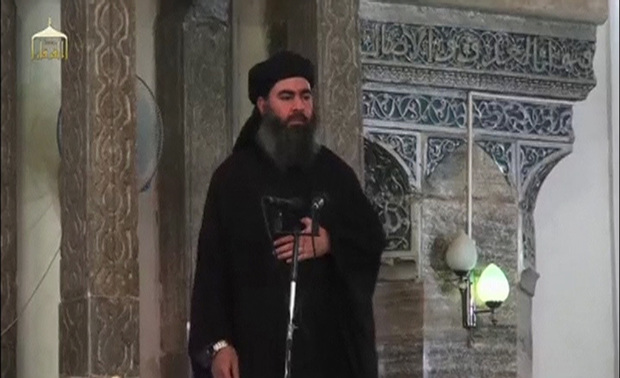 An image purported to be of Islamic State leader Abu Bakr al-Baghdadi at a mosque in the Iraqi city of Mosul, in July. Photo: REUTERS

The woman was identified as Saja al-Dulaimi, an Iraqi, by a Lebanese security official and a senior political source. Investigators were questioning her at the Lebanese defence ministry.

A source with contacts with Iraqi intelligence told Reuters there was cooperation between Iraqi and Lebanese authorities leading up to her capture.

Saja al-Dulaimi was one of 150 women released from a Syrian government jail in March as part of a prisoner swap that led to the release of 13 nuns taken captive by al Qaeda-linked militants in Syria, according to media reports at the time.

Abu Bakr al-Baghdadi has three wives, two Iraqis and one Syrian, according to tribal sources in Iraq.

Islamic State has declared a caliphate and seized wide areas of Iraq and Syria, Lebanon's neighbour to the east.

The Lebanese security forces have cracked down on the group's sympathisers and the intelligence services have been extra vigilant on the borders with Syria.

In recent months they have arrested dozens of Islamic militants suspected of staging attacks to expand Islamic State influence in Lebanon.

A US- led alliance is seeking to roll back Islamic State's gains in Iraq and Syria, where the group is seeking to reshape the Middle East according to its radical vision of Islam.

Spillover from the Syrian conflict has repeatedly jolted neighbouring Lebanon. Militants affiliated to the al Qaeda-linked Nusra Front and Islamic State are demanding the release of Islamists held by the Lebanese authorities in exchange for the captured members of the Lebanese security forces.

The United States is offering $10 million for information on al-Baghdadi, an Iraqi, whose real name is Ibrahim Awwad Ibrahim Ali al-Badri al-Samarai.