Former Wallabies captain David Pocock was arrested today after chaining himself to a digger with other activists in protest against the biggest coal mine under construction in an Australian national forest. 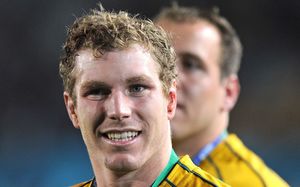 The Zimbabwe-born 26-year-old, who has been sidelined for the last two years by knee injuries, joined local farmers and environmental campaigners in the blockade at Whitehaven Coal's in the Leard State Forest in north west New South Wales.

Reuters reports the Brumbies flanker was arrested along with a local farmer.

The protesters are calling for construction of the mine to be halted and for an inquiry into how the mine won approval from local and national governments.

"I believe it's time for direct action on climate change, standing together as ordinary Australians to take control of our shared future," Mr Pocock told reporters.

New South Wales police confirmed the arrest of two men at the mine site where seven protesters locked themselves to an excavator after gaining access late on Saturday.

Whitehaven, which is on track to become Australia's biggest independent coal producer in 2015, is looking to speed up construction of the Maules Creek coal project so that it can start exporting early next year and bolster revenue in the wake of depressed coal prices.

Construction on the $A767 million project is ahead of schedule and below budget despite a protest blockade that has been in place for more than two years. More than 280 people have been arrested, according to the protest group.