The Auckland bureau of the Australian Broadcasting Corporation is to be axed to meet the $A254 million the government is slashing from its budget over the next five years from July 2015. 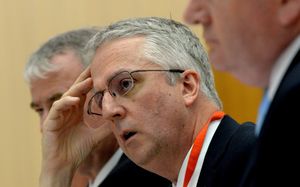 More than 400 staff could lose their jobs as management have also flagged a reduction in the news service.

Managing director Mark Scott made the announcement when he addressed staff at the ABC's Ultimo Centre in Sydney this morning.

Mr Scott said the corporation was committed to using back-office and overhead savings to fund the $A207 million that would be cut from the budget from July next year, the ABC reports.

"We anticipate that more than 400 people - close to 10 per cent of our ongoing workforce - face potential redundancy as we adjust our activities over coming months," Mr Scott said.

"We regard the changes as vital to securing the long-term health of the organisation but I acknowledge that is no comfort to those who will lose their positions."

In his address, Mr Scott said there would be a review of the ABC's property holdings, with its site at Gore Hill in Sydney to be sold.

The ABC's Adelaide television production studio and five regional radio offices would be closed, and remaining non-news TV production in other states would be wound down.

Mr Scott said there would also be a rationalisation of the ABC's television outside broadcast vans and a scaling-back of television sporting broadcasts.

Mr Scott has also proposed the creation of a new regional division and ABC Digital Network, to begin in mid-2015, and a $A20 million digital investment fund.