Mr Whitlam led the country through a period of massive social change from 1972 to 1975 before his ousting by governor-general Sir John Kerr.

"Our father, Gough Whitlam, has died this morning at the age of 98," Mr Whitlam's family said in a statement. 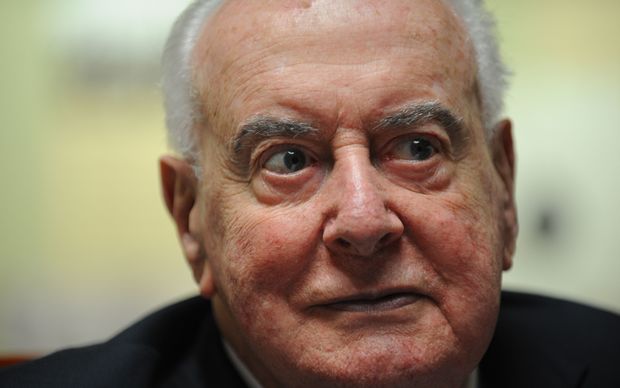 "A loving and generous father, he was a source of inspiration to us and our families and for millions of Australians. There will be a private cremation and a public memorial service."

Parliamentary proceedings in Australia have been suspended today, the ABC reports.

As tributes roll and flags are set at half-mast, Prime Minister Tony Abbott said Gough Whitlam was proof that individuals can make a difference to the country.

Born in the Melbourne suburb of Kew on July 11, 1916 Edward Gough Whitlam was the son of Martha and senior public servant Frederick Whitlam.

When he was 10 years old, his father, then the Commonwealth deputy crown solicitor, was transferred to Canberra and the family moved to the national capital.

Young Gough sat the leaving certificate four times in Canberra and is distinguished as having been the only prime minister to have grown up there.

In his twenties, Gough Whitlam studied Arts and Law at the University of Sydney and began his long married life with Margaret Dovey, the daughter of Justice Wilfred Dovey. The same year they married, 1942, he signed up to the Royal Australian Air Force and served as a navigator and bomb aimer.

By the end of the war the Whitlams had two sons, Antony and Nicholas, and Gough Whitlam had joined the Australian Labor Party.

The key political issue of the age was the war in Vietnam. Anti-war demonstrations plagued the Coalition government and in 1966, as deputy opposition leader, Mr Whitlam visited Vietnam.

He visited again as opposition leader in 1968, and criticised the Gorton government's successive troop increases at the behest of US president Lyndon B Johnson.

Labor's opposition to the war in Vietnam and a new focus on health policy reform raised its standing with voters. The 1969 election saw the ALP gain 17 seats, coming within four seats of victory.

Momentum for political change grew and Mr Whitlam seized on the mood, leading the ALP to the next election, in 1972, with the simple yet galvanising campaign slogan "It's Time" - which was emblazoned on t-shirts worn by celebrities campaigning with the would-be PM.

On December 2, 1972, after 23 years in the wilderness of opposition, the ALP won and Mr Whitlam became Australia's 21st prime minister.

During the Whitlam government's three years in office, a record number of bills were enacted, and change swept through the nation.

Labor won a double-dissolution election in 1974 but bore heavy criticism for its handling of the economy. A perfect storm of dire economic conditions emerged. Commonwealth spending surged, wages exploded, industrial disputes escalated, inflation soared, and unemployment rose. The government cut tariffs by 25 per cent and boosted the Australian dollar by 25 per cent against the US greenback.

With the Whitlam government under growing pressure over a loans scandal, the opposition hoped to pressure him into calling an election, he refused and the governor-general Sir John Kerr famously intervened.

The head of state used his constitutional powers to dismiss the government of the day. With a simple stroke of the Governor-General's pen, Gough Whitlam was no longer prime minister. Malcolm Fraser was appointed caretaker PM while the country reeled from the episode - now known simply as "the Dismissal".

Mr Whitlam maintained to the end that the crisis was political rather than constitutional, and could have been resolved, through political negotiation, in his government's favour.