United States-led forces have stepped up air strikes against Islamic State fighters threatening the Syrian town of Kobane, near the Turkish border.

The coalition had carried out 21 strikes over two days, a sharp increase that slowed IS advances, the US said. 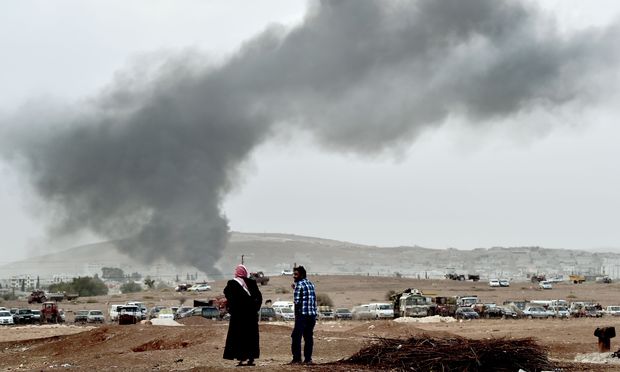 US President Barack Obama predicted a "long-term campaign" against the militant group, which holds swathes of Syria and Iraq.

He was speaking at a meeting of military commanders from 22 countries that have joined the anti-IS coalition, the BBC reports.

"This is an operation that involves the world" against IS, Mr Obama said after the meeting at Andrews Air Force Base near Washington. "There are going to be periods of progress and setbacks."

Mr Obama said the allies were "deeply concerned" about the situation in and around Kobane.

The battle for the predominantly Kurdish town has lasted for a month and is regarded as a major test of whether the coalition's air campaign can push back IS.

US-led forces have been carrying out air strikes in support of Kurdish forces there for two weeks. In a statement, the US military said yesterday's raids had destroyed IS buildings and military vehicles.

IS is believed to control about half of the town, from which more than 160,000 people have fled. Capturing it would give the group unbroken control of a long stretch of the Syrian-Turkish border.