Cyclone Hudhud is pounding the eastern Indian coast, causing extensive damage and prompting the evacuation of some 350,000 people.

At least three people have been killed in Andhra Pradesh and three in Orissa.

The cyclone, classed as "very severe", brought winds of 205 km/h as it passed over the coast near the city of Visakhapatnam. 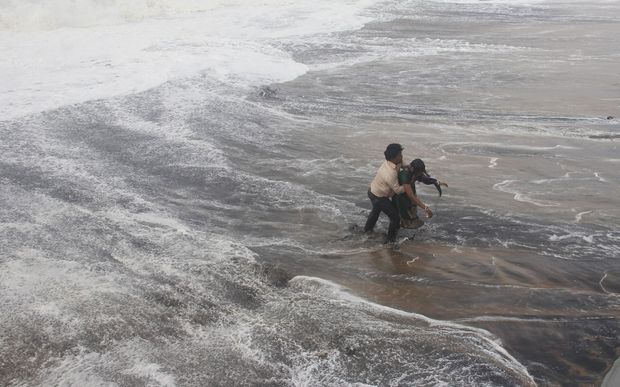 A man carries his wife to a safer ground after a wave hits a beach in Gopalpur in Ganjam district in the eastern Indian state of Odisha. Photo: Reuters

The winds and heavy rains have brought down trees and power lines, and damaged crops and buildings in both states.

It is feared a storm surge of up to two metres could inundate low-lying areas and hundreds of relief centres have been opened in the two states. Disaster relief teams have also been sent, the BBC reports.

Andhra Pradesh chief minister Chandrababa Naidu said it was too early to assess the damage fully.

"We are unable to ascertain the situation; 70% of communication has totally collapsed," he said.

The three deaths in Andhra Pradesh occurred in separate incidents, two were killed by falling trees and one by a collapsing wall.

The streets of Visakhapatnam, one of the largest cities in south-east India and home to a major naval base, remain largely deserted.

K Hymavathi, the special commissioner for disaster management for Andhra Pradesh state, said: "Hundreds of trees have been uprooted and power lines knocked down."

He added: "The situation is very severe. The national highway in the region has been shut."

In its latest report, the India Meteorological Department said sea conditions would become "phenomenal" off the north Andhra Pradesh and south Orissa coasts.

It also warned that a storm surge of up to two metres would "inundate low-lying areas of Visakhapatnam, Vijayanagaram and Srikakulam".

The director of the Bhubaneswar centre of the IMD, Sarat Sahu said that Hudhud was "likely to trigger heavy rains in most parts of south Orissa and the neighbouring states of Chhattisgarh and Telengana", raising fears of heavy flooding.