Malala Yousafzai, the Pakistani schoolgirl shot by the Taliban for championing education for girls, says she is honoured to receive this year's Nobel Peace Prize. 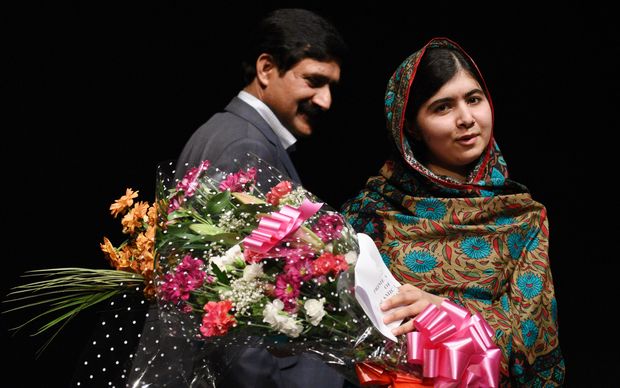 Malala Yousafzai, stands with her father Ziauddin Yousafzai, after addressing the media in Birmingham. Photo: AFP

She is the youngest person to receive the award and shares the award this year with Kailash Satyarthi, an Indian campaigner against child slavery.

Miss Yousafzai, who is now based in Birmingham, said Mr Satyarthi's work on children's rights inspired her and she was very happy they were sharing the award.

She said the fact they are from different countries and follow different religions sends a message.

"It gives a message to people of love between Pakistan and India, between different religions. If we both support each other it does not matter what's the colour of your skin, what language do you speak, what religion do you believe in," she said.

Miss Yousafzai was awarded the prize last night but chose to wait until the end of her school day in England before speaking publicly about the honour, the BBC reported.

The campaigner for girls' education described the situation in her home province in 2012, at which time she was shot in the head for championing girls' right to education.

"At that time, there was terrorism, women were not allowed to go outside of their houses, girls' education was totally banned, people were killed," she said.

At 17, Miss Yousafzai has eclipsed Australian-born British scientist Lawrence Bragg, who was 25 when he shared the Physics Prize with his father in 1915.

Miss Yousafzai and Mr Satyarthi were picked for their struggle against the suppression of children and young people, and for the right of all children to education, the Norwegian Nobel Committee said.

Mr Satyarthi has headed various forms of peaceful protests and demonstrations, focusing on the exploitation of children for financial gain.

"The Nobel Committee regards it as an important point for a Hindu and a Muslim, an Indian and a Pakistani, to join in a common struggle for education and against extremism," Thorbjoern Jagland, the head of the Norwegian Nobel Committee, said on Friday.

"It has been calculated that there are 168 million child labourers around the world today," he said. "In 2000 the figure was 78 million higher. The world has come closer to the goal of eliminating child labour."

In 2012, Miss Yousafzai was attacked in 2012 on a school bus in the Swat Valley in northwest Pakistan by masked gunmen as a punishment for a blog that she started writing for the BBC's Urdu service as an 11-year-old to campaign against the Taliban's efforts to deny women an education.

Unable to return to Pakistan after her recovery, she moved to Britain where she underwent surgery and eventually set up the Malala Fund and supporting local education advocacy groups with a focus on Pakistan, Nigeria, Jordan, Syria and Kenya, Reuters reported.

Mr Satyarthi dedicated his Nobel Peace Prize to children in all forms of slavery including bonded labour and trafficking, saying it was an honour.

The prize, worth about $US1.1 million, will be presented in Oslo on 10 December, the anniversary of the death of Swedish industrialist Alfred Nobel, who founded the award in his 1895 will, Reuters reported.