Two students at the University of East Anglia in England are trying to make urinating in places other than toilets an environmentally friendly decision.

Chris Dobson and Debs Torr have created the #gowiththeflow campaign which encourages students to take their morning wee in the shower. 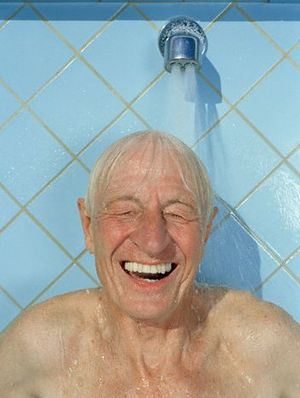 Good for the environment? Photo: CORBIS

They hope to get all 15000 students at the university to take part and are asking them to declare their habits on Facebook.

"We've done the maths and this project stands to have a phenomenal impact," Mr Dobson said.

The point being that saving on your morning flush will save water.

He told Morning Report combining the two activities would save 12 litres of water per day and if everyone in the east of England, one of the driest parts of the UK, saved water this way it would save 70 million litres of water a year.

He said there is absolutely no health risk from peeing in the shower and whilst the water is flowing it is perfectly sanitary.

31 out of 40, or 77.5 percent, of people who texted in said they are all for peeing in the shower, six people are against it - and two had yet to decide.