Bali police are not aware of any plans to attack the holiday island but they are increasing vigilance as Islamic State (IS) ideology creeps into Indonesia. 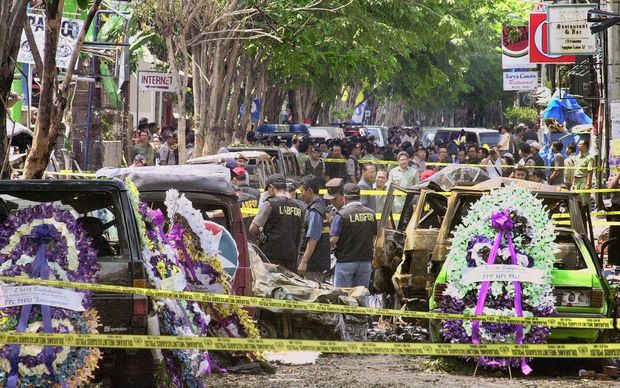 The aftermath of the 2002 Bali bombings, which claimed 202 lives. Photo: AFP

There are concerns Australia's deployment to the United Arab Emirates, in readiness to fight IS in Iraq, could make Australians a target when holidaying abroad, AAP reports.

Two hundred and two people from 21 nations, including 88 Australians and three New Zealanders, died in the 2002 Bali bombings blamed on the Jemaah Islamiah militant group.

Indonesian President Susilo Bambang Yudhoyono is reported to have ordered authorities to keep a closer eye on foreign nationals in Indonesia after Detachment 88 on Saturday arrested four foreigners suspected of having IS links in a known terror hotspot in central Sulawesi.

Meanwhile, police in Central Java have tightened security measures at the world famous Borobudur Temple after a threat, apparently inspired by IS, was found on Facebook last month.