Iraqi MPs have today approved a new cabinet but key security posts remain unfilled, as America's top diplomat prepares to visit the region to build a coalition against jihadists.

New premier Haidar al-Abadi had been under heavy international pressure to form an inclusive government that could present a united front against the militants, led by the Islamic State group (IS) who have seized much of the country's Sunni heartland. 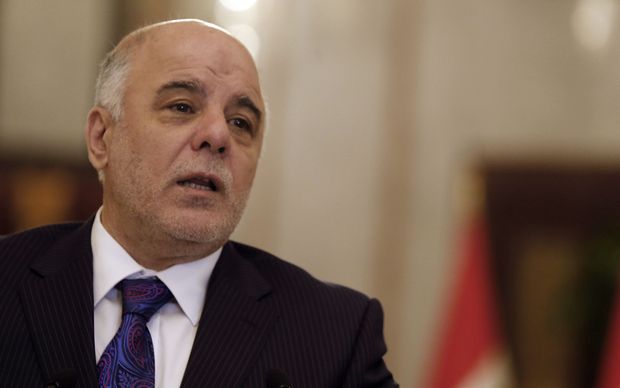 New Iraqi premier Haidar al-Abadi has yet to decide who will take the interior and defence posts. Photo: AFP

The outgoing government faced criticism that it alienated the Sunni Arab minority, revitalising militants within the community, AFP reports.

US Secretary of State John Kerry praised the "new and inclusive" Iraqi cabinet as a "major milestone". "Now is the time for Iraq's leaders to govern their nation with the same vision and sense of purpose that helped to bring this new government together," he said.

Mr Kerry was set to leave the United States on Tuesday on a trip to Jordan and Saudi Arabia as part of efforts to build an international coalition to counter the IS militants. A State Department spokeswoman said more than 40 countries have already indicated a willingness to help in some way against the jihadists.

US President Barack Obama, who made his political career opposing the war in Iraq and pulled out American troops in 2011, has promised to unveil a long-awaited strategy on Wednesday to tackle IS in Iraq and neighbouring Syria.

The new UN human rights chief, Prince Zeid Ra'ad Al Hussein, said IS atrocities promised only a "house of blood" for those living under their rule, while the head of Egypt's prestigious Al-Azhar religious institution also condemned the group.

The crucial parliament session opened to chaotic scenes, with speaker Salim al-Juburi struggling to maintain order and many MPs absent.

Eventually, 289 out of 328 lawmakers showed up and helped approve three deputy prime ministers and 21 ministers, but key posts - including the interior and defence posts - remain unfilled.

Mr Abadi has asked for a week to fill them, and will run the ministries in an acting capacity until then. The last government also started with key positions empty and acting ministers ended up filling them for four years.