Pro-democracy activists in Hong Kong have disrupted a speech given by a Beijing official explaining voting changes for the territory. 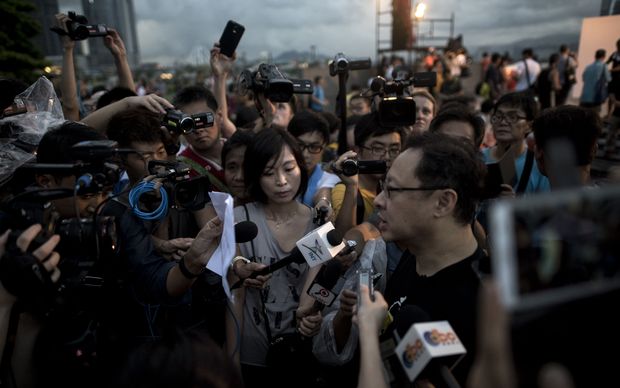 Benny Tai (right), co-founder of the Occupy Central movement, talks to the media at a rally near the Hong Kong government complex. Photo: AFP

They chanted slogans and held placards accusing Beijing of breaking its promise to allow Hong Kong to choose its leader directly.

On Sunday the Chinese government ruled out open nomination of candidates for the chief executive election in 2017.

Agencies reported that as Mr Li approached the lectern, several lawmakers and demonstrators stood up with placards and a banner, chanting: "The central government broke its promise, shameless." They were eventually escorted out by security guards.

A large group of pro-democracy activists were amassed outside of the hall. Police used pepper spray on at least four activists when a group attempted to force their way into the hall, according to the South China Morning Post.

A small number of pro-Beijing activists also showed up and briefly clashed with the opposing camp.

Mr Li continued with his speech, saying any leader who wished "Hong Kong will become an independent political entity or will change the country's socialist system will not have a political future".

The issue of how Hong Kong should choose its next leader has gripped the territory in recent months.

China had promised that the people in Hong Kong, whose chief executive has in the past been chosen by a small group of the elite, would be able to elect their leader by 2017.

But on Sunday it said candidates would need the support of more than 50 percent of a nominating committee to run in the election, and that only two or three would be selected.

Critics expect the committee to be heavily tilted in favour of Beijing loyalists, giving Beijing an effective veto over candidates.

In the last election, candidates required only 12.5 percent of votes from an election committee to qualify. That committee would then go on to pick the chief executive from the pool of candidates.

Mr Li said the new rules would reduce the risk of populist candidates being selected, and were in line with Hong Kong's mini-constitution, the Basic Law, which states that candidates must be selected by "democratic procedures".

Angry activists have vowed to set in motion an "era of civil disobedience" with a series of actions aimed at occupying the main financial area of Hong Kong.