A nine-year-old girl in the United States has killed her shooting instructor by accident while being shown how to use a high-powered submachine gun. 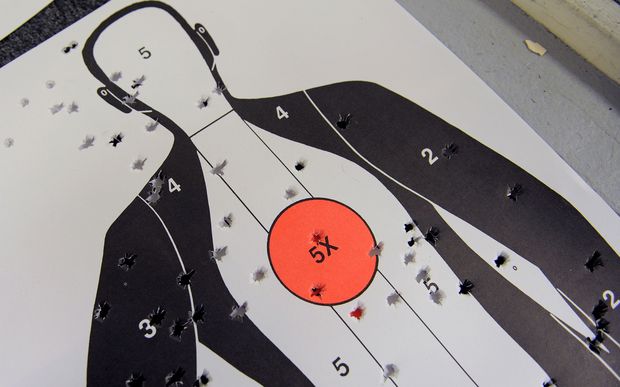 The instructor was giving the girl a lesson at a shooting range in Arizona when the recoil from the automatic fire caused her to lose control of the Uzi.

Charles Vacca, 39, was shot in the head and died after being airlifted to a hospital in Las Vegas, the BBC reports.

The girl was at the shooting range with her parents, who filmed the lesson.

Watch the girl and her instructor before the shooting

The footage shows the instructor coaching her as she fires a single shot at a target at the Last Stop shooting range in White Hills, Arizona.

The Uzi then appears to be switched to automatic as the girl pulls the trigger and loses her grip of the weapon.

The video, edited and released by the Mojave County Sheriff's office, ends abruptly before the instructor is shot.

The website of the shooting range, called Bullets and Burgers, says children aged eight and older can shoot a weapon if they are accompanied by a parent.

Range operator Sam Scarmardo told Klas TV they had never had an incident in the 12 years it had been open.

"We really don't know what happened. Our guys are trained to basically hover over people when they're shooting," he said.

"If they're shooting right-handed, we have our right-hand behind them ready to push the weapon out of the way. And if they're left-handed, the same thing."

Correspondents say it is common in parts of the US for children to be taught how to use firearms.

Many firing ranges have strict safety rules on instructing children.