Fighters from Islamic State (IS) have taken control of a key Syrian government airbase, activists say.

The Tabqa airbase was the last remaining stronghold of Bashar al-Assad's government in Raqqa province, the BBC reports. 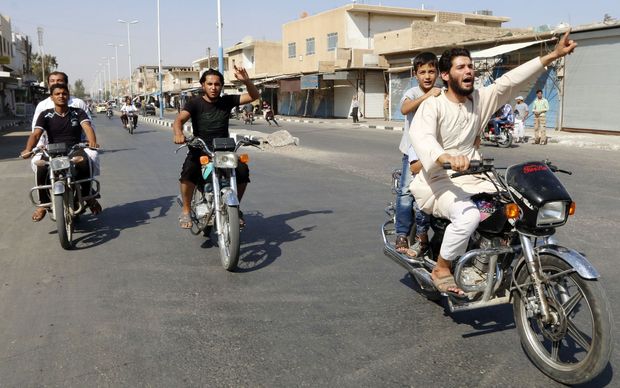 State TV confirmed that government forces had "evacuated" the airbase. Days of fighting there have reportedly killed hundreds on both sides.

More than 191,000 people have now been killed in the three-year-old Syrian conflict up to April, the UN said.

IS, formerly known as Isis, has expanded its reach into large parts of eastern Syria and northern Iraq in recent months.

The US has launched limited airstrikes against the group in Iraq but has not targeted them in Syria.

The Syrian Observatory for Human Rights, a UK-based activist group with opposition ties, said clashes around the airbase were ongoing but added that the base was under IS control.

Hundreds of soldiers and IS fighters had died in the past few days' fighting around the base, the Observatory said.

Syrian state television confirmed that government troops had lost control of the base.

Government forces were conducting airstrikes on the base after the troops evacuated, it reported

The base lies around 45km outside Raqqa city, the main powerbase of IS, and is believed to hold dozens of warplanes, helicopters, tanks and artillery.

Analysts say the fall of the base is a significant blow for the Syrian government's ability to project air power into the north of the country.

The base was the last remaining government outpost in the province, the BBC reports.

Meanwhile, a young American held hostage for two years by an Islamic rebel group in Syria has been released to United Nations peacekeepers in the Golan Heights.

US secretary of state, John Kerry, has confirmed the release of Theo Curtis, a researcher whose disappearance had not been previously reported.

Mr Kerry said the United States reached out to more than two dozen countries for help in securing his release by the Jabhat Al-Nusrah group.

The news comes less than a week after a video surfaced showing the slaying of a captive US journalist, James Foley, at the hands of another rebel group, Islamic State.