A small volcanic eruption has occurred under Iceland's Dyngjujokull glacier, prompting authorities to raise the warning code for aviation to its highest level, red.

The region of the Bardarbunga volcano, in the centre of the North Atlantic island nation, has already been evacuated due to days of heightened seismic activity there. 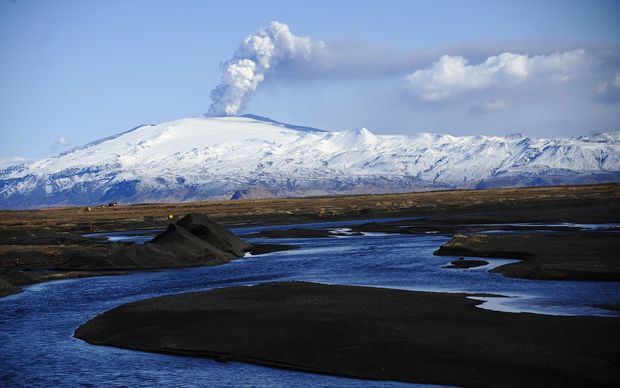 Smoke and ash billow from the Eyjafjallajökull volcano near Porolfsell, on 21 April 2010. Photo: AFP FILE

Meteorologists believe a small sub-glacial lava eruption has begun under the glacier.

The red alert is the highest warning on the country's five-point scale and indicates an eruption is imminent or underway with a significant emission of ash likely. The colour codes are intended to inform the aviation sector about a volcano's status.

Ash from the eruption of Iceland's Eyjafjallajokull volcano in 2010 shut down much of Europe's airspace for six days, affecting more than 10 million people and costing $US1.7 billion.

There have been thousands of small earthquakes over the past week at Bardarbunga, Iceland's largest volcanic system, located under the ice cap of a glacier but in a different range to Eyjafjallajokull.

The Met Office in the UK said an Icelandic Coast Guard airplane was flying over the area with staff from the office and the Civil Protection agency. Data from the equipment on board the plane was expected later this weekend.