Iceland began evacuating people in areas close to its largest volcano after warnings of a possible eruption. 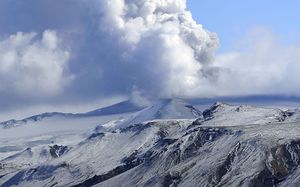 The Icelandic Meteorological Office has raised its aviation alert to "orange", the second-highest level after four days of increasing seismic activity.

They also feared floods from melting ice could cause serious damage to the country's infrastructure.

Police announced they had "decided to close and evacuate the area north of Vatnajokull as a result of seismic activity on the Bardarbunga".

It was not known how many people have been moved as the area was remote, but emergency services have been placed on alert.

Millions of travellers were affected when Iceland's Eyjafjallajokull volcano erupted in 2010.

The ash cloud from that eruption caused the planet's biggest airspace shutdown since World War II, with fears it could damage aircraft engines.

Aviation officials are worried an eruption of Bardarbunga could disrupt air travel in northern Europe, with a repeat of the problems from the Eyjafjallajokull eruption.