The United States says its planes have bombed more positions held by Islamic State fighters near the strategic Mosul dam in Iraq.

Iraqi and Kurdish officials say they have now seized the dam back from the jihadists, but fighting for control of the surrounding area is continuing, especially around the southern side of the adjacent compound and in nearby villages to the south.

The Islamic State radicals denied reports that they had been driven off the dam, saying they had repelled the attacks and inflicted heavy losses.

Unusually, American military officials seem to agree, saying the battle was not yet over and the area not yet fully secured, the BBC reports.

US President Barack Obama said said the move was a "major step forward", and the US had begun a long-term strategy to defeat the militants.

The dam, captured by Islamic State on 7 August, is located on the River Tigris about 50km upstream from the city of Mosul. It controls the water and power supply to a large surrounding area in northern Iraq.

Iraqi forces have launched an operation to drive Islamic State militants out of Tikrit, the hometown of executed former dictator Saddam Hussein.

Officers in the operations room have told Reuters they are advancing rapidly from the south but have been slowed by landmines, roadside bombs and snipers in the west.

Iraqi and Kurdish forces have been encouraged by the first American air strikes in the country - launched against the hardline Sunni insurgents - since American troops withdrew in 2011. 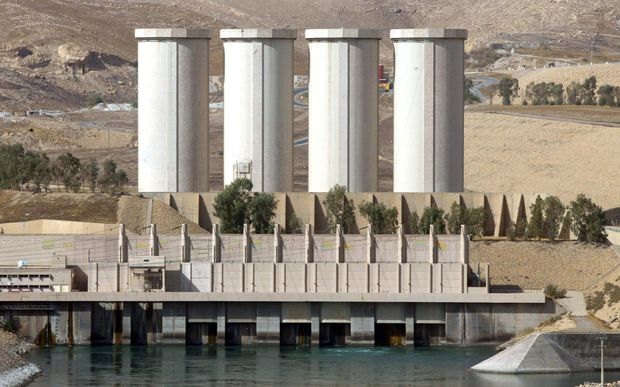 The Mosul dam on the Tigris River. Photo: AFP