Police in Missouri have fired tear gas and stun grenades at protesters after days of unrest sparked by the fatal shooting of an unarmed black teenager by a white policeman in the St Louis suburb of Ferguson.

Police say they have arrested 31 people during another night of angry protests.

The president is sending Attorney-General Eric Holder to Ferguson, where justice department officials were working alongside police and the National Guard. 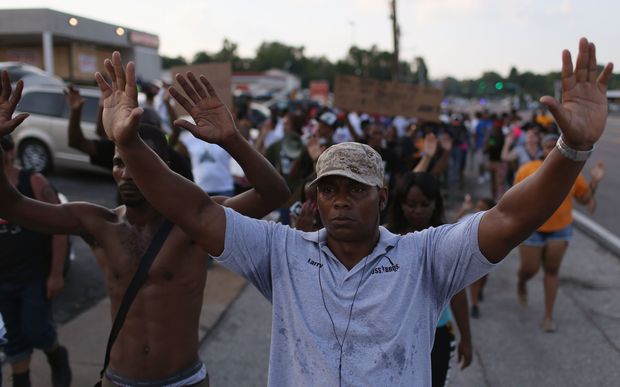 Witnesses said the action came after hours of street protests that had been tense but mostly peaceful, and after the state's governor lifted a curfew, Reuters reports.

National Guards have been deployed to end looting and burning of stores that have punctuated protests and stirred questions about race relations in the United States since the shooting death of 18-year-old Michael Brown on 9 August.

Governor Jay Nixon, who had declared a state of emergency for the town on Saturday and ordered the streets cleared for a curfew that ran from midnight to 5am, said the National Guard would fall under the supervision of the Missouri Highway Patrol.

National Guard troops could be seen walking on the fringes of the gathering, keeping a distance from protesters. 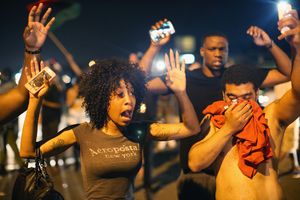 Demonstrators protesting over the killing try to stand their ground despite being overcome by tear gas. Photo: AFP

Mr Obama has urged restraint on the part of law enforcement and protesters as National Guard troops are deployed in the town to restore order after more than a week of civil unrest.

He has condemned some of the looting that has taken place, but also the heavy-handedness of police.

The president talked of the underlying issues that have been exposed by events in Missouri, talking of young black men being left behind and being viewed as objects of fear in communities across the country. He said although he understands public anger over Mr Brown's death, violence is not acceptable.

"Giving in to that anger by looting or carrying guns and even attacking the police only serves to raise tensions and stir chaos. Our constitutional rights to speak freely, to assemble and to report must be vigilantly safeguarded. There is no excuse for excessive force by police or any action that denies people the right to protest peacefully."

It was earlier suggested by a medical examiner that Michael Brown may have been shot at least six times by a police officer in Ferguson on 9 August, including twice in the head.

The family have called for the arrest and prosecution of the officer involved in the killing, Darren Wilson, who has been suspended with pay.

On Monday, lawyer Ben Crump said Mr Brown's family had asked Dr Baden to perform an autopsy as they "did not want to be left having to rely on the autopsy done by the St Louis law enforcement ... the same individuals they feel are responsible for executing their son in broad daylight".

Shawn Parcells, a forensic pathologist who assisted Dr Baden, said a wound to Mr Brown's right arm may have been sustained as he had his hands up, "but we don't know".

He said the wound was consistent either with having his back to the officer or facing the officer with his hands above his head or in a defensive position. Witnesses have said Mr Brown was shot as he held his hands up in a position of surrender. 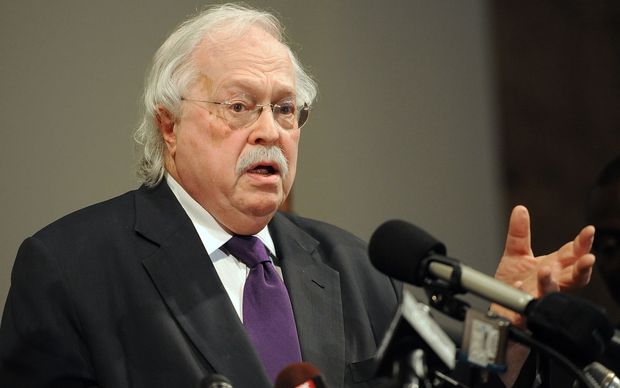 One bullet entered the top of his head and another entered directly above his right eyebrow. Mr Brown was 1.9m tall.

"All of the gunshot wounds could have been survivable, except the one at the top of the head" Dr Baden said.

Dr Baden said there were no signs of a struggle, as abrasions around the teenager's face were likely from falling to the pavement after being shot.

He also believed Mr Wilson did not shoot him at close range as there was no gunpowder residue on his body, suggesting the officer was at least 2ft away.

Another autopsy on Mr Brown will be conducted by the US justice department, in addition to examinations by Dr Baden's and St Louis county officials. 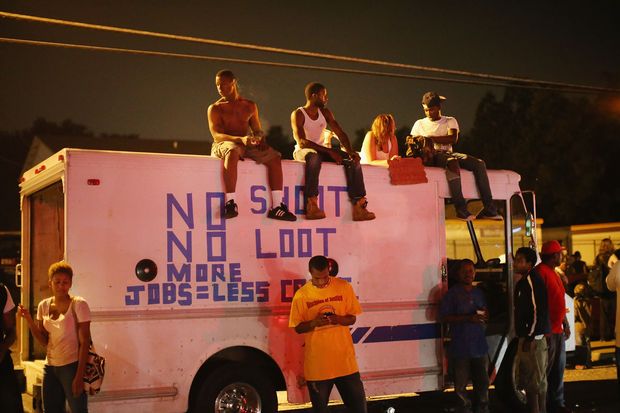 Despite the Brown family's continued call for peaceful demonstrations, violent protests have erupted nearly every night in Ferguson since the killing. Photo: AFP