The United States is exploring options to evacuate thousands of Iraqi civilians trapped on a barren mountain in northern Iraq by Islamic militants.

Helicopters have been used so far to ferry to safety refugees from the Yizidis sect. They and other minorities, including Christians, have been told by the militants they must convert to Islam or die. 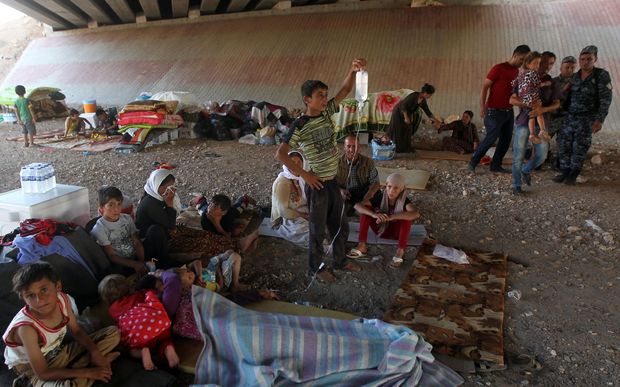 These Iraqi Yazidis fled their homes in the town of Sinjar last week and are now living in a makeshift shelter in the Kurdish city of Dohuk. Photo: AFP

Air drops have delivered urgently needed aid to the Sinjar mountains to tens of thousands of people from the Yazidi minority, the BBC reports.

Monsignor Nizar Semaan, a spokesperson for the Syrian Catholic Church, said there is also a desperate need for aid in the city of Irbil to feed the tens of thousands forced to flee the Islamic State jihadists.

He said though some aid has arrived it is not enough, as there are 200,000 displaced people who have nothing with them.

Monsignor Semaan also appealed to the international community to help defend the refugees from the jihadists who are threatening them.

The US has already launched four rounds of air strikes targeting Islamic State fighters near Irbil, the capital of Iraqi Kurdistan.

A Kurdish official said recent strikes on militants in Nineveh province had helped the Kurdish Peshmerga fighters retake the towns of Gwer and Makhmur after heavy fighting.

However, the militants have reportedly captured the town of Jalawla, about 115km northeast of Baghdad after weeks of clashes with Kurdish fighters in the area.

The United States has renewed its call for Iraqis to form a consensus government.

Iraq's highest court has ruled in favour of caretaker Prime Minister Nouri al-Maliki in his battle to secure a third term.

The court said according to the constitution, President Fuad Masum must ask Mr Maliki to form a new government following inconclusive elections in April this year.

However, critics say Mr Maliki, a Shia, has precipitated the current crisis through sectarian policies. Sunnis, Kurds and even fellow Shia have urged him to go.

US Secretary of State John Kerry warned Mr Maliki not to disrupt the process.